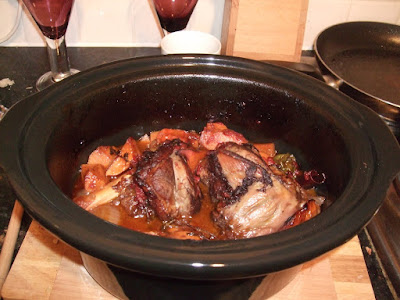 Yesterday after we got back from Solihull I cooked a dish from my brand new copy of Levi Roots's Caribbean Food Made Easy (I got it for £5.99 from The Book People – bargain!). The recipe I made was the very first one in the book: Caribbean Lamb Shanks. This is a kind of casserole-type dish, and there are two things to bear in mind before I continue telling my story:

This recipe also introduced a couple of ingredients which were new to me, including ground allspice and Scotch Bonnet chillies. The allspice was interesting because when I had picked it up in Sainsbury's earlier in the day, I checked the back for the ingredients, presuming that it contained more than one spice, but none were listed. I felt a bit of a fool after getting back home and having a look at the front of Levi Roots's book and reading that allspice is in fact a berry, and it was named 'allspice' by the British when they arrived in the Caribbean and couldn't work out what flavour it was and thought it tasted like all the known spices in existence!

The Scotch Bonnet chillies were a joy to work with – almost like little parcels. I was apprehensive at first when I saw on the packet that they were listed as "very hot", when I have only ever cooked with medium chillies, but I followed the instructions and cooked one whole and one cut in half, removing the seeds from the halved one and making sure the whole one had no sneaky holes where seeds could spill out (Levi says that the green chillies have tougher skins, so are better to use when leaving them whole). I found it much easier to remove the seeds from these than from other kinds of chilli. And the heat was just about right in the finished product. My boyfriend described it as a sneaky kind of heat: it was almost an afterthought and you didn't quite notice it until you felt your face going a bit red.

The meal was fairly easy to prepare – there was lots of chopping vegetables, which is fine and seasoning the lamb shanks was ok, although I'm still never sure if I'm using too much or too little salt and pepper in my seasonings – I suspect, if anything, it's too little, but I think that is preferable to too much. Things seems to taste ok to me, anyway!

You had to brown the lamb shanks "on all sides" before transferring to the cooking pot, which was interesting considering shanks are very uneven shapes, so this involved some careful balancing in the frying pan as I tried to get them as evenly browned as I could!

Disaster very nearly struck at the next stage as I went to transfer them to the casserole dish and I couldn't believe I had been such an idiot. The lamb shanks would not fit in the pot with the vegetables already in there and I still had sweet potato and the sauce to add yet. I went to my boyfriend in a panic, who at first suggested I split it between two different pots, but this was hardly practical and it would be difficult to split the seasonings for the sauce and still get the recipe right. But then he said, "Hang on," and started rummaging around in one of the cupboards and eventually started to pull out the slow cooker. Was he going to suggest I put the slow cooker in the oven? Was he mad? And then, as if by magic, he pulled out from the slow cooker a big round, deep cooking pot, more than big enough for the lamb shanks and all the vegetables and the sauce. I had forgotten that the slow cooker comes with a removable pot – I was initially unsure how it would work in a conventional oven, but it was perfect. I shall definitely be using it again (and one day I may even use it in my slow cooker, which, shamefully, I haven't done yet).

In went the lamb shanks and the rest of the ingredients and then I set the timer and went to put my feet up.

Two and a half hours later, we sat down at the table to one of the most scrumptious meals I have ever cooked. It was just gorgeous. The lamb was so tender it almost melted in your mouth, and the sweetness and spiciness combined made for a very authentic Caribbean flavour, which for some reason really surprised me ("This tastes Caribbean! I know it's supposed to, but it does!"). What equally surprised me was that I'd used quite a vile red wine for the sauce (it came with a Sainsbury's £10 meal deal – a poor pretender to the Marks and Spencer offer) and it still tasted good!

There were a few minor things I could improve on next time: when I put all the ingredients into the pot, the instructions were "add the sauce, then the rest of the ingredients" and I added them as they came to hand, which ended up meaning that I added the tomato puree last; so, instead of it all mixing with the sauce some of it got stuck to the lamb and the vegetables, but this didn't seem to impair the flavour. Next time I would also chop the sweet potato into larger chunks, because I accidently cut some of the slices quite thinly and it kind of disintegrated into a sweet potato mush in places, which I don't think was supposed to happen.

This was a great dish, though, and the recipe had good, clear instructions which definitely helped me to make such a successful meal. I'd encourage anyone even remotely interested in Caribbean food to buy this book. YUM.
Posted by Charlene at 18:12