Toad-in-the-Hole with a Twist (of bacon) 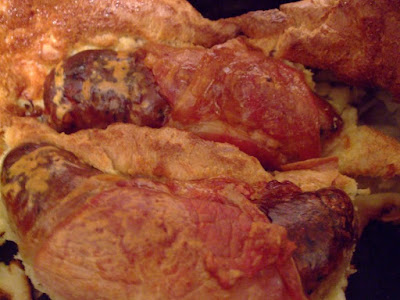 My fiancé had been away last week with work. He went to St Petersburg and apparently went to a Sausage Restaurant in a microbrewery one evening! Despite this he still wanted me to make him a homecoming present of Toad in the Hole. To make it extra-special I wrapped the sausages in bacon. It was nice, although I felt the taste of the bacon overpowered the sausages, which was a shame because they were my favourite pork and chive sausages from the local butchers. The bacon did give the batter it was cooked in a slightly salty, bacon-y taste, which was quite pleasant though! I think next time I will leave the bacon out, but it gave a nice twist to a classic dish.

All of this got me thinking last night about how much of our relationship revolves around food. For example, the nature and location of my work means that I get home before my fiancé (which is partly why I prepare most of the meals), so one of the first things we do when he gets home is sit down to eat, while we catch up on how our respective days went. Many of our first dates were in restaurants or involved home-cooked food. I think we'd all do well to recognise food as not just fuel for our bodies, but a social event in which we all participate.


On a different note, there's a post over at Teakay's Blog responding to my mashed potato story, with his own tale of mashed potato woe. This one blows my 'mashed potato incident' out of the water!
Posted by Charlene at 08:36

Email ThisBlogThis!Share to TwitterShare to FacebookShare to Pinterest
Labels: batter, sausages, toad in the hole