For the love of bread

The weekend was a busy one in terms of foodie things. On Saturday I travelled all the way to deepest, darkest Birmingham to attend a bread-making course courtesy of Loaf.

I was a complete novice when it comes to bread-making, as I'd not even attempted it before, not even with a bread-machine! The course really inspired me though and I now feel confident enough to try to make bread at home. 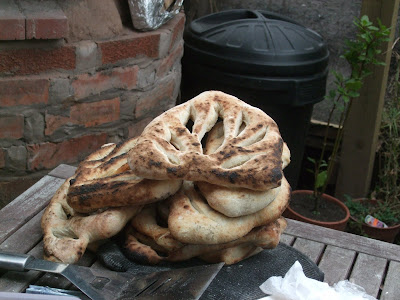 We baked a lot of bread during the 6 or so hours of the course, including a white loaf, a wholemeal loaf, ciabatta, fougasse (see above) and breadsticks. We made our own pizza bases and cooked our pizzas in the earth oven for lunch – there's a basic, primal pleasure in making the very foundations of your lunch, cooking it using a real fire and then eating it (how many of you would make the pizza dough from scratch rather than buying it from the supermarket? I know what I would have done before I went on the course!). I also found the whole kneading process a joy, not just because I got to get my hands mucky (I am a child at heart), but, again, there's a basic pleasure in being such an integral part of the creation of food; and making such a staple food as bread from scratch invigorates the soul: it says I am a maker of things and a provider. Hear me roar! Or something. 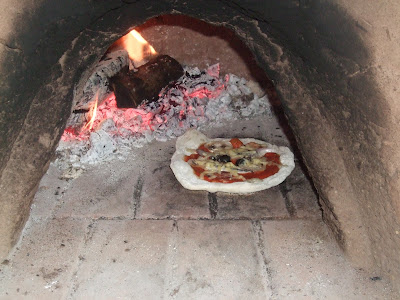 Tom, the director of Loaf, also demonstrated how to make brioche and let us take the dough home. I baked it and took it to work. It was yummy.

We also got to take home some Sourdough starter to make our own sourdough breads, which should be interesting.

And now that I've tasted my creations, it's going to be hard going back to supermarket bread, as I know I inevitably will have to at some point (although, I tend to buy from the bakery section – that's got to be better, hasn't it?). The ciabatta in particular was a revelation: it was so moist. And it had flavour.
Posted by Charlene at 17:35