Dinner fit for a queen 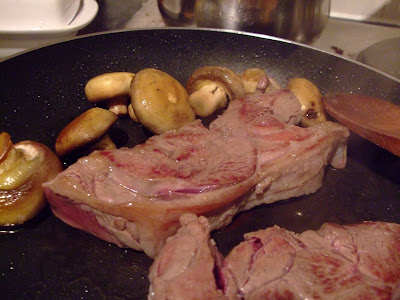 So, the venison was very good. As you can tell from the picture, I fried it in some oil with some mushrooms. It was extremely tender, full of flavour and all-round generally delicious, and is possibly now my favourite kind of meat. Quote of the evening comes from my ever-lovely fiancé during a discussion about the benefits of local meat: "And what's great about this coming from Charlecote Park is that we may have seen the deer it came from!"

To accompany the steaks, I cooked a sauce from English Food by Jane Grigson called, quite aptly, Venison Sauce, described as, "a simple version of the many varieties of port wine sauce for venison. It was invented by Queen Victoria's chef, Francatelli." There's something quite satisfying about cooking something with such a strong regal history. I wonder if Queen Victoria enjoyed it as much as we did. I bet she didn't have hers served with Aunt Bessie's oven chips (yes, part of me does feel guilty for whacking some chips in the oven when I had fresh, organic, local potatoes in the cupboard, but I really fancied some oven chips. And we have used all the potatoes now, anyway).

It's a simple recipe, with only four ingredients: 2 tbsp port wine, 250g redcurrant jelly, a bruised small stick of cinnamon (cue me trying to work out how to bruise a cinnamon stick: what, do I hit it? Do I physically bruise it or just bruise its ego?), thinly pared rind of lemon. You put them all together and then simmer for about 5 minutes, and stir. The stirring is supposed to break down the redcurrant jelly, which it did (apparently, if you use commercially made redcurrant jelly you might need to add some water, which I did), although there were still some fine lumps left at the end, and I really have no idea if that's how it's supposed to be; you couldn't distinguish these when it was in your mouth and it tasted pretty good, so really, who cares. The recipe does say "strain into a hot sauce-boat". Give me a break, Jane, I don't own a sauce-boat, nevermind the wherewhithal to heat it. And I was hungry for venison and couldn't be bothered to 'strain' it (presuming this means sieve?). Nevertheless, I was pretty pleased with it, but please note this recipe could probably easily serve 4 and I don't recommend pouring the lot over just 2 venison steaks. Just as an aside.

For pudding we had two homemade mincepies and some port, having bought a bottle to use in the sauce. This is when I discovered that I really like port (my fiancé claims I've tried it before and said I didn't like it, but I don't remember). Perhaps I liked the port a little too much that evening.