Now, I don't usually watch much TV and the TV I do watch is usually all on BBC iPlayer; but in order to bring you my pick of the Christmas Cookery Shows, I've been watching a fair bit of TV the last few days and even fired up 4 on Demand to see what was on offer over there. See how dedicated I am! Anyway, enough preamble, on with the show(s)!

6) Nigella's Christmas Kitchen
I probably can't legitimately judge this one: I only watched 15 minutes of one episode and gave up. I know this is most likely an unpopular opinion, but I can't stand Nigella. I mean, I'm sure she's a lovely person, but I find her insufferable to watch on the telly. She just looks far too pleased with herself the whole time. But I mainly switched off because the 'Puddini' she was making were making me feel nauseous, both from the name and the ingredients: surely, Christmas pudding, chocolate and treacle would be enough to send anybody into a diabetic coma? Someone also needs to point out to her that not everyone has a dishwasher - when she was telling the viewer how to sterilise jars, she didn't offer an alternative to using a dishwasher. My fiancé pointed out that most people have dishwashers and we are in the minority not having one, but that's not the point. But if that's your kind of thing, then fair enough: happy viewing!

5) Delia's Classic Christmas
I know plenty of people think Delia is past it now and that Nigella has taken the baton of definitive Christmas cooking, but I'm rating her programme above Nigella's because I actually found it compelling enough to watch all of it. It has it's flaws: there were far too many shots of Delia wandering round her GIANT house, and I personally found it unnecessary to hear about Delia's religious views. But some of the food looked like the kind of thing I might want to try cooking at some point, such as the Beef en Creoute, although I did get frustrated with the lack of information about some things - maybe some suggestions on where one can source panforte would have been useful.

4) Jamie's Family Christmas
I haven't always enjoyed cooking from Jamie Oliver's cookbooks in the past, so I enjoyed this much more than I thought I would. I've watched 2 episodes so far, but may go back and watch the rest of the episodes on 4 on Demand when I get time. I like how down to earth it is and that he makes the recipes look really quite simple. My only major problem is that he seems to go so fast with everything, that I did find it hard to keep up with what was happening at some points. The party food episode was great, chock full of great ideas if you're thinking of entertaining over the Christmas period.


3) Rick Stein's Christmas Odyssey
This is really an extension of Rick Stein's Far Eastern Odyssey and an advert for it. But I enjoyed it because it was a bit different from all the other Christmas cookery programmes, offering far Eastern recipes ideal for using up left-over turkey. The scenes from his travels were wonderful because they showed the connection between the food he was cooking and the people and background it comes from. I also liked that Rick Stein confessed he was filming it in June. I was surprised that he didn't know the trick of rolling a lime before cutting it to get more juice out, but at least he admitted it, and it does show as that as cooks we are learning things all the time.

2) Heston Blumenthal's Christmas Feast
Technically, this isn't a cookery show - or at least not one where you can reproduce the recipes at home. I am including it here for sheer watchability. I have had a lot of respect for Heston Blumenthal ever since I saw his series Big Chef takes on Little Chef. I think he does some amazing things with food and it is never boring to watch! It was great to see the diners' reactions to the foodstuffs he provided - it amused me that some of them weren't ok eating a dormouse, but were fine with eating venison after being presented with a pageant of a hung deer skin being shot by an archer, complete with oozing blood. Ironically, I think the thing I would have had most trouble eating would have been the pudding at the end, because it was so beautiful, it almost seemed a shame to eat it! This show certainly isn't for the faint at heart!

1) The Hairy Bikers' Twelve Days of Christmas
And so, the award goes to the hairy bikers! I love watching the hairy bikers - they make tasty-looking food, they make it for people to eat rather than just demonstrating it, they travel around and cook out in the open, and they're funny and silly and down to earth. So, yes, I'm a bit of a fan. The premise of this show was to make dishes related to the items in the song The Twelve Days of Christmas. Some of them were inspired (a partridge served with pickled pears for "a partridge in a pear tree"), others had slightly tenuous links with the song (5 giant pretzels for "five gold rings"). It was a wonderful idea though and made for some interesting dishes, most of them a bit different from your typical Christmas fare. I will most definitely be downloading some of the recipes from the BBC website!


So, there you have it - my top 6 of the Christmas Cookery Shows. No doubt you disagree with all of them - feel free to tell me in the comments.

Finally, please find a picture of some Christmas cookery from my work colleague Vicki: she made each of us at work one of these giant snowflake biscuits for Christmas - I'm glad I got a picture, because it is now no more! 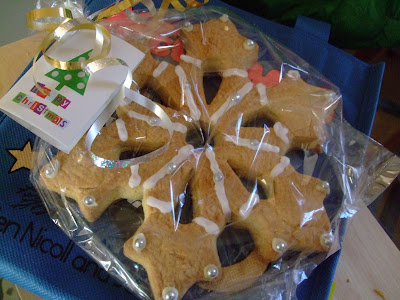