This review has also been published at itsallboutcoventry.co.uk.

It was with some trepidation that I entered the Saxon Mill on Friday night: I’d been there to eat on one previous occasion and found the food rather mediocre. But perhaps I just ordered the wrong thing. Having checked out the menu online (http://www.saxonmill.co.uk/food.htm) shortly before leaving home, I suspected I was in for a treat this time.

The Saxon Mill has an open kitchen, and you can see meat cooking on the rotisserie from your table if sitting in the right place, which gives it a wonderfully rustic atmosphere.

The food was delivered to us promptly and before our starters arrived we were given an appetiser of bread and some olive oil, which at first was a little confusing as my fiancé had ordered the Rustic Bread + Roast Garlic Bulb + Olives + Extra Virgin Olive Oil + Aged Balsamic at £3.95 (which is supposed to be a sharing plate, but I didn’t get much of a chance to share any with him). He was relieved when his real starter arrived. My starter was a little more expensive at £5.95, but it was worth it for the Mushrooms + Dolcellate + Sourdough + Blistered Tomatoes + Ruccola. Being served sourdough in a pub restaurant was a delight and the mushrooms oozed juice as I cut into them and the rich cheese was perfectly complemented by the wonderfully seasoned tomatoes –it was just enough to whet my appetite for my main dish.

£12.95 may sound a lot for a pork dish (Spit Pork Loin + Truffle Mash + Black Pudding + Roasted Pears + Jus), but it was without a doubt the best pork dish I had ever had, and the best-presented plate I have ever seen in a pub restaurant. The pork was served on a generous bed of truffle mash, topped with black pudding and a roasted pear (a very minor error on the menu there, as it only came with one – although one was enough), and surrounded by the jus. Each element of the meal on its own was tasty, but together the flavours mingled and merged in such a way as to create a kind of euphoria in my mouth. My stomach was grateful too. 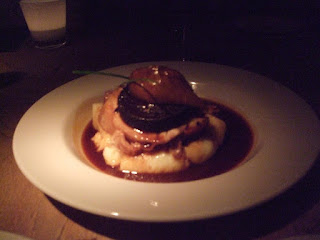 My fiancé had the Classic Burger at £9.95 – this was an enormously thick burger and apparently was very good, as were the chips it was served with. It’s good to note that there’s a good range of food and there’s a fair few dishes for those who prefer more traditional pub fare, including steak, and beer battered haddock.
I can’t remember which wine I had other than it was a small glass of Shiraz and cost £4.75 (the cheapest glass was £4.25) and it was pretty good - very warm and fruity.

The dessert menu was a slight disappointment in that there was nothing on there which felt stunning enough to tempt me after such a flavoursome meal. I was half-tempted by the treacle pudding (desserts ranged from about £4 to about £7), but being already quite full I decided to quit while I was ahead – I wanted to leave with the glorious flavours of the Spit Pork Loin still reverberating in my mouth.

The service is generally very good. The staff are polite, helpful and attentive. It’s quite an informal affair, however, which sits slightly at odds with the quality and grandeur of the food. Then again, it is a pub restaurant.

I do see a slight problem with the menu and that is the choice: there is so much tempting food on there that I found it really hard to make a decision. A perfect excuse for a return visit, though! Although the menu gives the impression of some kind of demonic maths lesson with all those plus symbols, this is highly refined food in a warm, homely pub setting, and that to me is a perfectly balanced equation.
Posted by Charlene at 12:39