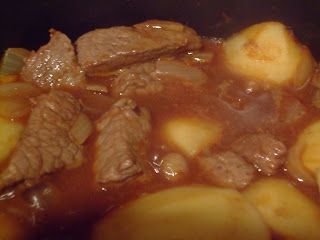 It's perfect stew weather at the moment, so this evening I made my very first stew. (Yes, that's right, I hadn't even made a stew before - who says being a food blogger means you have to be an expert?!) I decided to make something out of the Maltese cookbook I borrowed from my mum (I am half-Maltese).

On browsing this book, I commented to my other half that it suddenly struck me how rustic all the food in it seemed. "Ah, peasant food!" he exclaimed. I'll be diplomatic and stick with rustic, but there is a certain simplicity to the food in the book, which is surely not a bad thing: sometimes, I crave simple food. And this particular recipe is simple, but damn tasty.

Stuffat tal-Laham means 'meat stew'- this particular version is made with beef. I have actually found a link to a recipe very similar to the one in my book - so similar in fact, that I suspect the owner of the website has the same book. The only discernable difference is that in my book it gives the very precise measurement of "some red wine" rather than a glass of red wine. When I'm cooking a recipe for the first time I like to follow instructions fairly carefully, then subsequently I might tweak the recipe here and there to suit my own tastes; thus, I duly put "some red wine" into the pot. The recipe doesn't involve any vegetables so I served them on the side, but next time I think I might throw some carrots in as well. The meat was a still a little tough after cooking for only an hour, so I think I'll increase the cooking time (and perhaps buy a better cut of meat) and increase the amount of stock (and possibly wine!) so it doesn't dry out to nothing; I used about 440g of stewing beef because that's all I had, and I was only cooking this for two, but I stuck to the rest of the recipe and found the liquid reduced just about enough within the suggested cooking time of 1 hour (the photo above was taken during cooking not at the end).

I haven't often fried meat in butter, but I did so as the recipe requested and the smell was amazing. The aroma of the whole thing cooking was just wonderful: I'm sure I can't begin to describe it accurately but imagine a mixture of butter, beef, tomato and wine smells all mingling harmoniously and you'll be on your way there. It tasted pretty good too. A simple, but effective recipe!
Posted by Charlene at 20:24