Yesterday, as the weather was glorious here in the Midlands (frost, a dusting of snow in some places, but bright, sunny and cold, but warmer in the sun!), I decided that this was the day to go for a wee trek around Garden Organic Ryton. I've been starting to get interested in the idea of growing some of my own produce and I thought this would be a good way to find out more about organic growing as well as getting some fresh air and (much-needed) exercise!

There wasn't an awful lot to see this time of year, but it gave us an idea of what sort of things are there, and there was a certain frosty beauty to the scenes we saw. 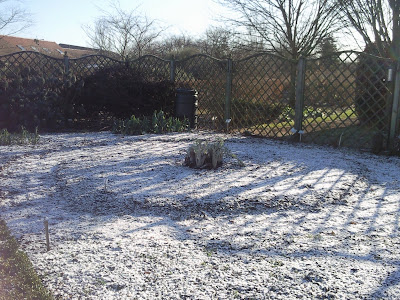 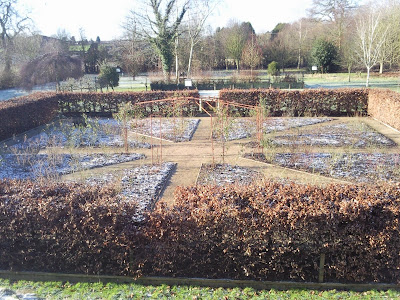 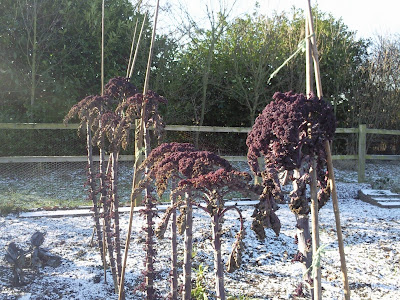 Ah, good old kale!
What we didn't realise when we set off is that we had arrived on Potato Day at Ryton Gardens, which might have explained why it was so busy at 10am on a cold January morning. Apparently, the world and his wife had turned up to buy potatoes for sowing. We had a quick look in the 'potato marquee', but it was very busy and all a bit daunting. We drifted towards the 'potato tasting' instead, which sounded jolly interesting, but they seemed to have run out of potato products to taste.
On our way out I paused by a stall advertising something called the 'One Pot Pledge', intrigued by what it was. This was explained to us by an over-enthusiastic lady who told us that it is a scheme aimed at people who haven't really grown anything before to help get them started. Telling her that this applied to us made her even more excited, possibly because the majority of people passing through were well-seasoned potato growers who were visiting for potato day. I duly handed over my email address and apparently I will receive some free tips and things in exhange for pledging to grow at least one pot of something. I haven't got a link to share with you yet, as there doesn't seem to be anything on their website about it at present, but I look forward to receiving an email.
I would have liked to have eaten some lunch at the café on site, but there was already a very long queue and no free tables before lunchtime, so we headed off after a quick look round the (very busy) shop.
It was a good visit and I would love to go back in Spring when more things are growing. It has helped inspire me to get on and grow some things and I am currently reading a couple of books specifically about growing in pots and in small spaces: Patio Produce and Grow Your Own Fruit & Veg in Plot, Pots or Growbags (I only have windowsills and a balcony to grow on). I also happened to mention to a work colleague who has an allotment that I was interested in growing some produce and she very kindly came into work one day having bought me some kit to get myself started! 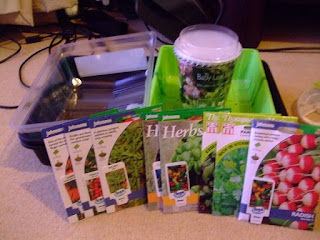 Still feeling quite nervous about the whole thing, as I have a long and varied history in killing plants, but I do really want to give this a go. Something that has also given me some inspiration is a blog called The London Vegetable Garden, which is written by a guy who is growing produce on his London balcony. Let's see if I can have some similar success with my Coventry balcony!
Posted by Charlene at 17:33