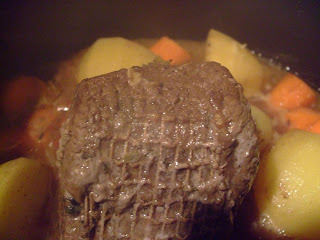 For our Sunday roast this evening, we had a Jamaican Pot Roast from Levi Roots' Caribbean Food Made Easy. I really like this book for its clear, easy-to-follow instructions and the tasty meals that result!

I prepared the topside of beef yesterday evening, by using a pestle and mortar to crush some garlic, red chilli, ginger, spring onion and thyme together into a lumpy paste. I then made some deep-ish holes all over the beef using a small knife and pushed bits of the paste into each of these holes (messy job, this!). The marinade was prepared consisting of soy sauce, malt vinegar and dark brown sugar and rubbed all over the meat - the meat was then left over night in the fridge, loosely covered. You're meant to turn the meat occasionally but I forgot and only did so once! Oops!

This was most of the hard work done now. This afternoon, after patting the meat dry, I browned it all over in my stock-pot, then removed it to make way for the chopped onion and diced celery. Once this had softened, some beef stock, plum tomatoes, the left-over marinade and some thyme was all brought to the boil and then the beef added back in and left to simmer for about 2 hours. I added peeled potatoes and carrots and left it to simmer for another 40-45 mins, et voila!

The recipe says to use small, waxy potatoes - I used larger ones and cut them in half, but I should have cut them smaller because they were still a little firm at the end of cooking. I used about 0.8kg of beef rather than the 1.8kg listed in the recipe, as I was making it for 2 and the recipe is for 6 people (and we still have meat left over which will be used for sandwiches)! I halved the amount of ingredients for the paste and the marinade, but still used the same amount of onion, celery and stock. I put in about half the amount of carrots and potatoes it suggests, and it all still seemed to work quite well.

The beef was lovely and tender and filled with delicious, yet subtle, flavour. The sugar added a certain sweetness to the dish and I really felt it made a wonderfully refreshing change to having an English roast (I think I get fed up of English roasts fairly quickly if I have them too often!). Once again, Levi Roots comes up trumps. If you are interested in making this recipe for yourself, I recommend buying his book - it's only £5.99 on The Book People. Happy cooking!
Posted by Charlene at 20:58