Taking (or, rather, making) Stock

Both my fiancé and I have been unwell over the past week. After consultation with a doctor, I was relieved to discover it wasn't swine flu or malaria, but that it was some kind of viral flu/cold thing. As a result, the week's meal plans went out the window as neither of us had the energy to do very much for a good few days. This left us with something of a glut of vegetables, as we still had about half the previous week's veg box when our new one arrived on Friday.

I started feeling a little better this weekend and have been up and about more, so decided to use up a lot of the left over vegetables by making some stock, and I ended up making both a vegetable stock and a chicken stock, as we had a left-over chicken carcass too from Saturday night's dinner. I've been watching a lot of River Cottage on 4 on Demand recently and have been influenced by Hugh Fearnley-Whittingstall's ideas about not wasting stuff, especially bits of animal. Documented below are my first ever attempts at making stock.

Both recipes I used were from Lindsey Bareham's A Celebration of Soup.

For the vegetable stock I used onion, carrot, celery, mushroom and trimmings of leek, broccoli and lettuce. 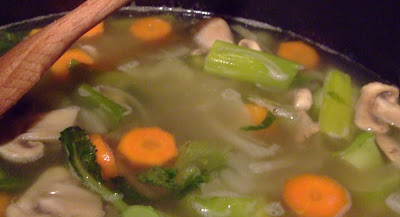 Here's the finished product next to my Lindsey Bareham book: 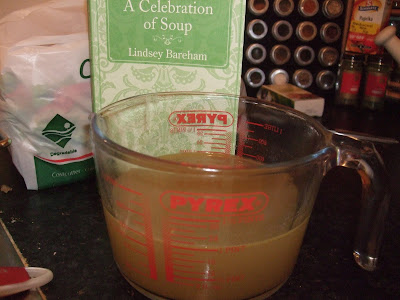 Next, of course, I decided to go one step further and to boil up some tasty chicken bones. 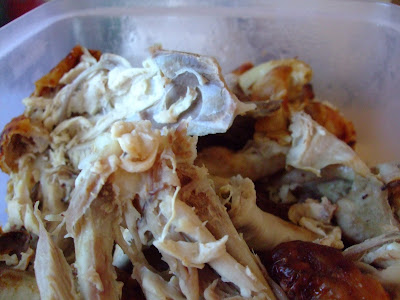 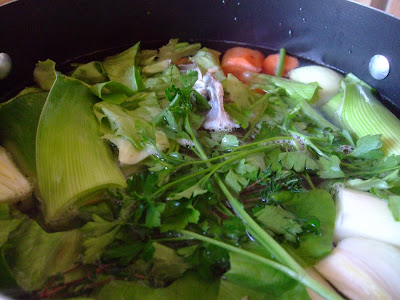 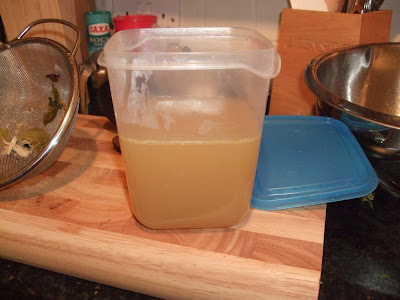 I think the chicken one tastes better than the vegetable one: vegetable one seems a bit bland and I don't know if I chopped the vegetables small enough or cooked it for long enough. I had a bit of trouble with the chicken stock when I was trying to simmer it, because one setting on my hob was too low (i.e. it wasn't really simmering at all), but the next setting seemed too high, with it starting to boil! This meant a fun game of constantly switching between the two settings for 2 hours in an attempt to get it right. Why doesn't my hob have half settings?!

I've already used some of the vegetable stock to make this vegetable broth from BBC Food. And, er, it wasn't very nice. In fact I couldn't eat it and threw it away. I'm not sure if it was my stock being too weak, but it basically tasted like vegetables cooked in wine - now, I like wine with many things, but this was just an awful clash of flavours. Not a recipe I'll be cooking again.

Finally, here is a blurry picture of my oven which I took by accident. Just because. 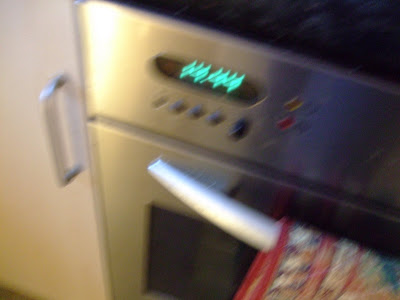