Yesterday I had some boneless chicken thighs in the fridge to use up - I had been planning on making some spicy jerk chicken thighs and had even bought some chilli peppers in town in the morning with this in mind. But then we picked up our fruit and veg box from my fiancé's parents. There were two giant leeks in there this week, and so the rusty old cogs in my brain began to squeak into life as I began to mull over what could be done with them. All of a sudden, I decided I would make chicken and leek pie. I have these mad whims sometimes.

Now, the slight problem with this is that my fiancé has a slight lactose intolerance - semi-skimmed milk is fine, but cheese and cream are not good for him. A lot of chicken pie recipes use cream, so I had to find one that didn't. After some googling, I found this recipe for Chicken, Leek and Bacon Pie from the Waitrose website. Perfect!

Yes, and I would make the pastry myself, damn it! I only really skim-read the recipe before I set to work, and I really didn't realise what a faff making puff pastry involves. I mean all that sticking it in the fridge for 30 minutes in between!

It is important to bear in mind at this stage that the only other kind of pastry I had made before yesterday is the one in this recipe for mince pies - it is massively easy (you don't even have to roll it out!) and makes the tastiest mince pies known to humankind. So, with this puff pastry malarkey, I really didn't have a clue what I was doing and whether what I was doing was right - I probably could have done with some visual aids to guide me. I think some of the instructions in this recipe aren't that clear, especially if you are a novice - a couple of times I had to get my fiancé to read it and ask what he thought I should be doing.

I got there in the end, though. Hours later, after all the cooling and rolling out again, I had something which looked like pastry! This then went back in the fridge while I made the filling. This was considerably easier than the pastry, although by this point, I couldn't be bothered to fry the chicken in batches - I used my stock pot, which is quite big anyway, so I fried the lot all at once. I ended up with very dry hands last night as I had to keep washing my hands from handling raw meat!

Once the filling was done, you were supposed to leave it to cool, which I did for 20 minutes. I'm not sure if it was as cool as it should have been when I spooned it into the pot, but it was gone 7pm by this point and I was tired and hungry. On went the pastry lid, which I did my best to seal round the edges, steam hole slashed in the middle, and egg brushed over the top by my faithful assistant (fiancé), then into the oven for 40 minutes. This was an epic day of cooking, people.

I was thoroughly expecting the pastry to be a disaster, but see for yourself. 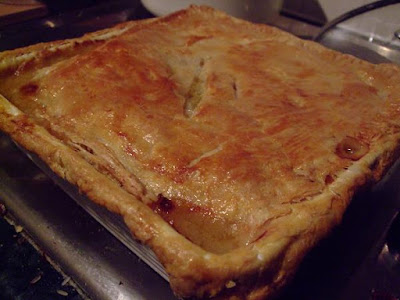 You can see that the pastry kind of sunk on one side where I didn't quite seal it properly but it doesn't really matter. The pastry tasted really good and was how puff pastry is supposed to be - crispy on top with softer layers underneath. I was astounded that it had worked! A fair bit of butter did seem to leak out into the pie, and I'm not sure that was supposed to happen, but it didn't seem to impair the pastry. I'd be tempted to use a little less butter next time, though. 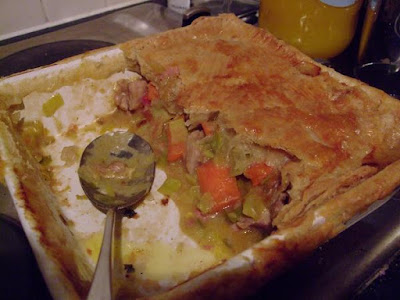 The filling was absolutely delicious too. It's been a long time since I've had a homemade pie, and it just tasted like the most delicious pie on earth - very hearty and rich. I used chicken thighs, rather than chicken breast because that's what I had in the fridge, but next time I'd like to try it with chicken breast, as I think it would be even nicer. I used 2 large leeks, not 4 as the recipe suggests, and that seemed to be plenty.

My fiancé had to suffer the rest of the evening listening to me exclaim, "I made a pie!" at every available opportunity.
Posted by Charlene at 08:13