I nearly began this post with the picture of the Corned Beef Casserole I cooked on Tuesday night, but decided it might put people off from reading any further.

Recently I bought two old cookbooks from a second hand bookshop. One of them was an American book, first printed in 1942. 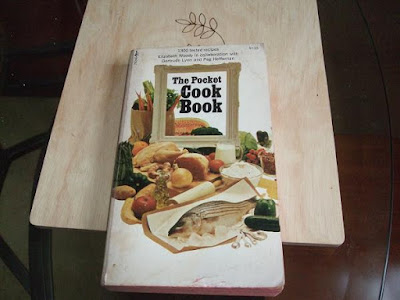 I decided that as an "experiment" I would cook something from the book. This book not only has 1300 tested recipes, but also contains cooking and nutritional advice. Did you know that vitamin B1 is "For good appetite, good digestion and steady nerves"?

Now, first things first, I can't deal with working in cups. This tends to be why I avoid American recipes. We have cup measures, but I don't understand in my head how much each thing is, so I can't visualise what 2 cups of corned beef looks like, unlike when I work in grams or litres etc. I can even work in pounds and ounces better than I can work in cups. Cups give me a headache. Especially when they ask for something like "1/4 cup chopped onion". Why can't it just say 1 small onion or something? That makes much more sense to me.

Secondly, 1 tsp of salt when you're already using salty canned corned beef is an awful lot. I would never normally put that much salt in any of my cooking, but for the purposes of the "experiment", I did. I could feel my arteries shrivelling in horror as I did it.

Everything was put into a casserole dish (for some reason you were meant to put alternate layers of rice and beef and then mixed the rest of the ingredients and pour over the top) and then cooked for 30 minutes. Here was the result: 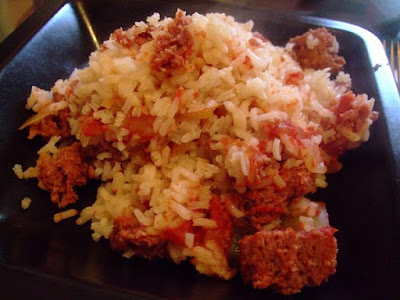 It tasted like ass. It was so salty, I couldn't get the taste out of my mouth for hours after eating some of it. I served it with some nice bread and butter and we both agreed that the bread and butter was tastier than the dinner. The dinner tasted of corned beef and salt. If you like those two things, go ahead and cook this. If, however, you are sane and have tastebuds, please don't put yourself through the trauma.
Posted by Charlene at 07:30