On Bank Holiday Monday, making Mini Egg Tiffin wasn't enough. No, I decided that I HAD to make Pasties. I got the idea in my head when browsing through Nigel Slater's Tender looking for something to do with swede. And when I get one of my schemes in my head, there is very little that will prevent me from following through with it.

The recipe makes 6 pasties, which I thought would be fine, imagining them to be small pasties – my fiancé and I could have a couple each for dinner and then one each for lunch the next day. Perfect!

This pastry required me, for the first time in my life, to buy some lard. I have never bought lard before, mostly because my reaction to it is, "Ewwwww, lard!". Anyway, I bit the bullet and purchased the lard and some more butter, which was also required.

I duly froze the butter and lard for a good hour before use and then came the grating. I had to grate the frozen butter and lard into the flour. Dear God, it was hard work. And while this was going on I was boiling the chopped potatoes and swede and frying the onions and beef for the filling. I am not usually very good at co-ordinating lots of things at the same time when cooking (contrary to the popular belief that women are fantastic at multi-tasking), but I (mostly) stayed in control of the situation.

As an aside, I ended up buying beef shin instead of beef skirt – because that's what happens when you decide to cook something at the last minute on bank holiday Monday and you have to purchase your meat from the supermarket – and it worked perfectly well. I was worried about it being too tough at the end of cooking, but it was lovely and tender.

Assembling the pasties was quite fiddly and I wasn't very neat at all with it. My work surface in my kitchen is so small, that I didn't have room to roll out all six balls of pastry at once, so I had to work in batches. I also wasn't able to use a round plate to guide me because all the plates we own are square. Once all the pasties were made and I put them on the oven trays ready for baking, I realised the enormity of what I'd done. 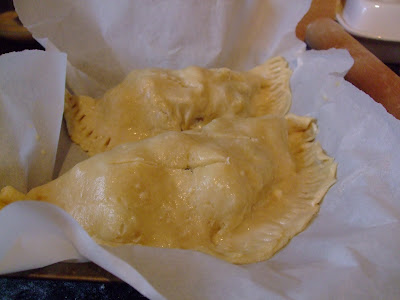 Yeah, I made six of those. There are only two of us in my household. Overcatering, much?

I was tired by the time it came to brush them with egg, so the browning ended up quite uneven. But they still tasted good, if lacking a little in pepper (when you only have a small pepper mill, there is only so much grinding you can do...). I served one each with chips. 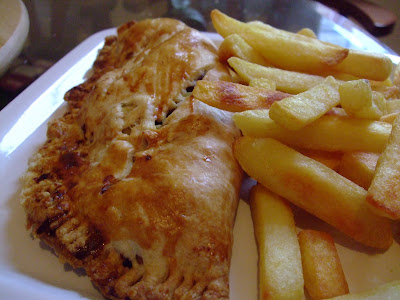 We donated two to family and then had one each for lunch the next day. They were even tasty cold and I was quite impressed by how well they stayed together!

According to Nigel Slater they're not proper Cornish Pasties because in this recipe the filling is cooked first, whereas in a traditional Cornish Pasty the filling should be placed in the pastry raw and then the whole thing cooked.

Not bad for a first attempt though, eh?
Posted by Charlene at 19:48