Now, what to do with them? Some googling about took me to this recipe for blueberry jam. I had never made jam before and this sounded so ridiculously easy, it seemed almost criminal not to give it a go. I always thought that making jam meant dicking about with large copper pots and thermometers, so this sounded too good to be true (note to self: if it sounds too good to be true, it probably is).

Once I started simmering the 'blueberries', I quickly realised that they were blackcurrants, given the colour oozing out of them. No matter, though, I thought. Surely the same principles would apply and I could carry on regardless. It actually looked quite promising and after adding the sugar it really looked like jam should look and I was excited about eating it. 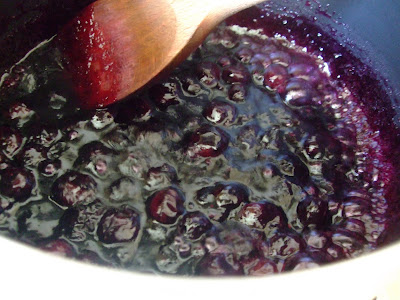 I duly left it in the jar to cool and decided to spread some on some toast for lunch; which I would have done, were it possible to spread the substance which had now congealed in the bottom of my jam jar. Hard as a rock. Well, not quite, but too hard for jam.

And I've no idea what went wrong. Lots of things could have gone wrong - I may have boiled it too much, not boiled it enough or this recipe might not work with blackcurrants - but I can't pin it down to any one thing.

I still intend to make jam in the future, so if anyone has any good recipes, please pass them on!
Posted by Charlene at 14:22