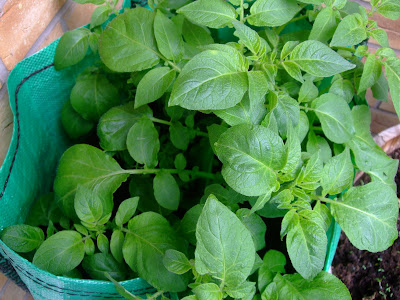 Another gem from the QI Fact of the Day:

When the potato first reached England, a potato-tasting banquet was given at the court of Queen Elizabeth I. Only the leaves and stems of the potatoes (which contain a poison called solanine) were served. All the guests became ill and left early.

The picture above is of the potatoes I am growing on my balcony, leaves bursting out of the growbag. As beautiful and abundant as the leaves are, we will not be eating them!
Posted by Charlene at 16:46