While in London, we also visited the Natural History Museum, mostly so my fiancé could gaze at the dinosaurs. Obviously, we went to the dinosaur shop while we were there and I managed to pick up a set of awesome dinosaur-shaped cookie-cutters for only £3. Because my fiancé loves dinosaurs and because I love my fiancé, I ended up spending a large chunk of my Sunday making dinosaur cookies.

I decided not to use the recipe on the back of the cookie-cutter packet because I didn't have all the ingredients, so I found this recipe instead. And, yes, while these claim to be "christmas cookies", I can confirm that you can used this recipe for any kind of cookie and the world doesn't collapse in on itself or anything. This recipe actually worked pretty well for my dinosaurs. Here are my cookies before going in the oven: 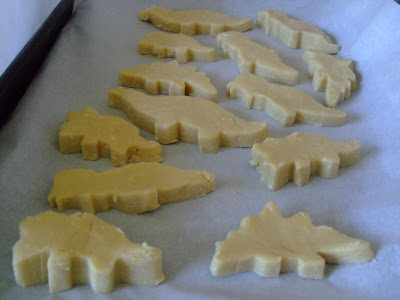 Once they'd been cooked and cooled, I set about icing them (after we'd eaten the broken ones, of course). I'd never iced anything before and found it rather fiddly and annoying. It's also the first time I've used food colouring in anything and I don't really want to make a habit of it, but it did look cool. 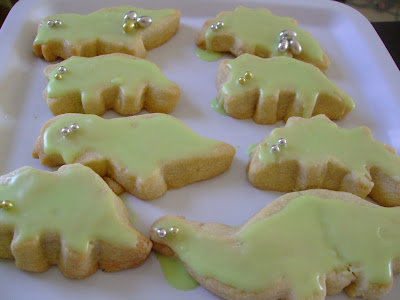 The oval-shaped shiny balls are dinosaur eggs. My fiancé helped me decorate them. Ironically, although the decoration was cute, we thought the cookies tasted better without it - they're so buttery and lovely (almost like shortbread - yum!), that it was a bit of a shame to have them coated in anything. Perhaps next time I'll just leave them plain.

As experiments go though, this was a good one!
Posted by Charlene at 20:28