In my continuing endeavour to write more about local events, today, dear readers, I travelled all the way to deepest, darkest Allesley, to visit the monthly garden market, the existence of which was recently brought to my attention by EcoExplorer. 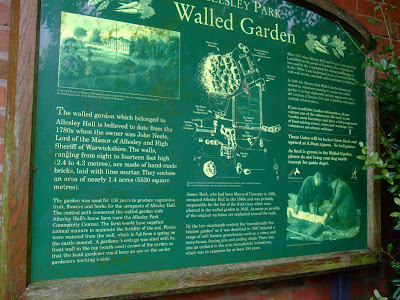 Allesley Park Walled Garden dates from the 18th century and used to belong to Allesley Hall. The official website can be found here, although it hasn't been updated in a while by the looks of things. 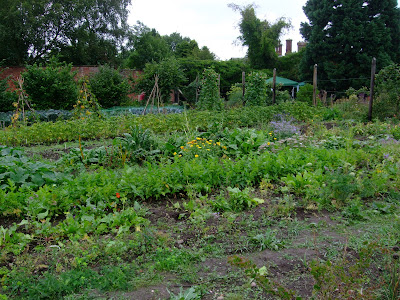 Over the past few years, the garden has been restored as an authentic 18th century kitchen garden and is now used as an educational resource. The market garden takes place every third Saturday of the month at 10.30am - 12.30pm during the Summer, and it was today that I decided to pop along for the first time.

There were four or five stalls selling a random collection of different items ranging from paintings to cakes. The stall that I was most interested in though (and so was everyone else) was the stall selling fresh vegetables, which I'm presuming and hoping were from the garden (on reflection, I should have asked, but didn't think of it at the time). I didn't buy a huge amount because of the veg box I get delivered and because I had to carry it home on the bus, but this is what I did buy: 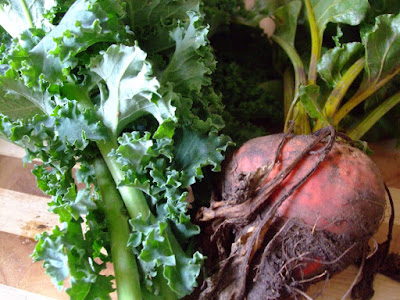 I bought a pound of curly kale and a pound of white beetroot (which I had never seen before), all  for the grand price of 80p! Bargain!

What a great idea this market and the Walled Garden itself is - a fabulous part of Coventry's heritage which until recently I knew nothing about. (I should point out that I have lived in Coventry for a measly two years, which is nothing compared with people who have had a lifetime to discover all the nooks and crannies of a place!)

Next month at Allesley Park Walled Garden it is a Heritage Open Day, and as well as the garden market, there will be a photographic competition and a cookery demonstration. This will be take place on Saturday 11th September and Sunday 12th September. For more information go here.

Allesley Park is very accessible by road (there is a car park on site) and by the number 23 bus - please go here for a map of the route.
Posted by Charlene at 19:24