So, my tomato plants haven't been doing too well. I think they've come down with a case of 'blossom end rot' and possibly another kind of rot as well (there seem to be several associated with tomato plants). I think it's because our watering of them has been a little inconsistent (ok, so I haven't always got the best memory...) and also when we had the scorching hot weather, I'd water them in the morning and the soil would be bone dry by the time I got home from work.

Growing tomatoes isn't as easy as I thought it would be. They also take up a lot of room. I have enjoyed watching them flower and then fruit though, even if I haven't had anything edible from them yet. Ah, well, I'll see how it goes and maybe try again next year.

The surprise success of my balcony garden though has been the potatoes. The leaves were starting to die off over the past week or so, so I decided it must be time to dig them up. So I dug and dug and dug and they just kept on coming... 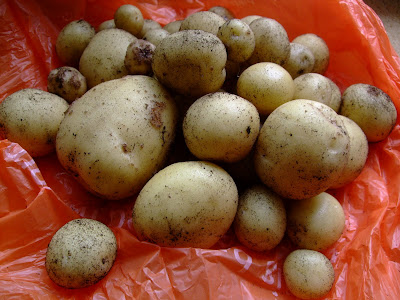 I was not only impressed with how many I unearthed, but also by the size of some of them! Bearing in mind, this was from one grow bag!

Growing potatoes was easy-peasy. All we did was plant them and then as they grew covered the shoots until the compost was near the top of the bag. Then we just watered them most days, but otherwise left them to their own devices.

I also had great fun digging them up - I loved getting my hands right in the soil and coming across these tasty treasures with surprising frequency. My fiancé compared me to a pig searching for truffles. Charming! What's wonderful though is because you can't physically see the potatoes growing, it's very pleasing when you realise what good work has been happening below the soil. I certainly wasn't expecting potatoes in such quantity - everything else we've grown on the balcony, we've hardly had any of because of the lack of space.

I definitely have a better idea of what's good to grow on my balcony now. Next year I want to grow more herbs, probably radishes again, definitely cut-and-come-again salad leaves, maybe try some courgettes and I'm feeling pretty inclined to grow potatoes again. All hail the mighty potato!

I used some of the potatoes to make this cottage pie from a recipe by The Hairy Bikers. It was lovely, although not quite as lovely as the recipe I normally make which is from English Food by Jane Grigson. 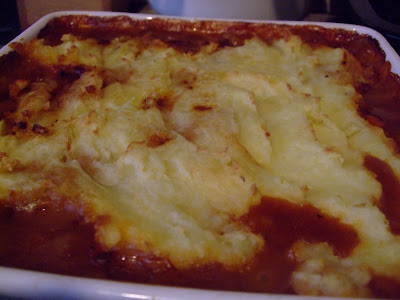 Obviously, potatoes do keep for quite a while, but I reckon those must have been the freshest potatoes I have ever cooked with - from earth to plate in a few hours, and dug up a mere few metres away from the kitchen - you can't get much more local than that!
Posted by Charlene at 19:49