We went to visit the Thai Dusit last night for a romantic meal. It had been a long time since we'd been, as I'd gone through a period of suspecting I had a shellfish allergy, but it now looks as if I probably don't. It is perhaps more worrying that this means that a restaurant I used to really like most likely gave me food poisoning - it still makes me wary of eating shellfish in restaurants now, as the memory of that incident is still potent! It's a shame because I love seafood of all varieties.

However, we figured the Thai Dusit was a safe bet, as we have had good experiences there in the past and you'd hope a restaurant of their kind of calibre would be using nice, fresh ingredients! And we weren't disappointed.

For our starter we had the mixed shared platter, which is a little pricey at £6 a head, but utterly worth it. 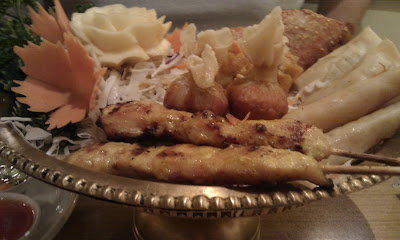 This photo doesn't do justice to the presentation. The starter includes prawns, which I ate, and I wasn't sick, hurrah!

For my main, I had Moo Priew-Warn, which was battered pork in a sweet and sour sauce. It was delicious and the stir fried egg noodles I had with it complemented it nicely - a heavenly combination of sweet, sour and savoury. The pork was delicately battered and the sauce was rich and warming, like an electric blanket on a cold winter's evening. But an edible one. My fiancé had Ped Pad Khing, a duck dish with ginger and stir fried vegetables. On the side he had coconut rice, which I hadn't tried before and now I'm not sure why. The creamy coconut with the rice was an amazing background to the spices in our meat dishes.Wow.

Wine was the house red, which seems to be a good complement to the spices in most of the dishes.

I skipped pudding, but my fiancé had the Chocolate Trofito. He kindly let me share some. Nothing spectacular, but tasty as frozen desserts go. But we don't go to the Thai Dusit for the desserts!

Service wasn't as good as it has been in the past on this occasion (it is usually very good - very attentive and polite waiting staff). At first they brought us the wrong dishes, but this was quickly rectified. I had booked the table earlier in the day, but when we arrived they couldn't seem to find our booking - fortunately they were able to seat us anyway.

If you like Thai food, it would definitely be worth your while checking out the Thai Dusit. They do takeaway too. You can have a look at the menu at their website.

Writing this review has already made me want to go again!
Posted by Charlene at 18:40