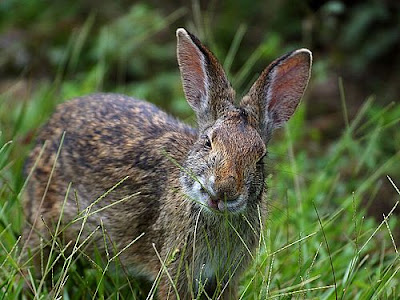 One evening we were walking along Spon Street and I noticed a sign in a butcher's window advertising, amongst other things, wild rabbit. I vowed that soon I would purchase some of this rabbit and make a stew. Last weekend that's exactly what I did.

I purchased some diced rabbit from T J Rowland Butchers on Spon Street. It is possibly the tiniest butcher's shop I have ever set foot in and the displays are rather haphazard, but it has a certain charm and the guys in there are very knowledgeable and extremely helpful.

The Maltese like rabbit a lot. My grandparents used to breed them for eating. Unfortunately, several attempts at trying to feed me rabbit when I was a child failed because I couldn't stand the thought of eating cute ickle fluffy bunnies. And I was smart enough to know it wasn't chicken - nice try, parents.

However, my views on the subject have changed somewhat over the years. Ok, well, I've watched a lot of River Cottage, basically, and Hugh Fearnley-Whittingstall is very persuasive. So, I'd much rather eat something which has been happily bunnying about in complete freedom and then killed humanely, than something intensively farmed which has been waddling around in its own excrement for months on end. In short, I now have no problem with eating bunnies, particularly wild bunnies, and am probably more comfortable with the idea of eating rabbit than chicken. How things change.

I decided to recover those opportunities I'd missed as a child to have some authentic Maltese rabbit-based grub, and plumped for cooking Stuffat tal-Fenek (Maltese Rabbit Stew). I looked at quite a few different recipes, all slightly different in various ways - I suspect every Maltese family has their own version of all the classic recipes, but this is one I've never learnt - and in the end, I think I mostly followed one on this page (you'll have to scroll down a bit, but it's there). Fellow food-blogger Mer also has a recipe on her blog which looks like an interesting variation using venison.

Anyway, my first attempt at cooking rabbit, and my first taste of it since the sordid attempts at deception during childhood, went rather well. 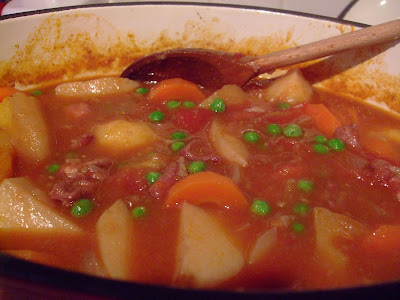 There is some rabbit in there, I promise you.

Conclusion: I like rabbit. A lot.
Posted by Charlene at 21:14