An unusual drink (and how I became radioactive) 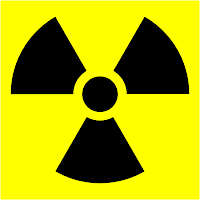 As I've mentioned before I suffer with an overactive thyroid (or hyperthyroidism or thyrotoxicosis). I was first diagnosed with this over two years ago, although it was in remission for a while, but this year it relapsed.

As a result, on Thursday I underwent radioactive iodine treatment in an attempt to sort it out once and for all. This is a lot less scary than it sounds, but still a little daunting. It was, however, quick, painless and, largely, side-effect free so far.

Oh, yeah, apart from the radiation my body is emitting that is. (I also may develop an underactive thyroid, but that is far more treatable and can be controlled effectively with drugs.)

I took the treatment at the hospital in the form of a drink. I can bet this will be the most unusual thing I have ever consumed. It came in a large, round lead pot. The technician had trouble removing the lid because it was so heavy. Inside was a tiny shotglass-sized glass pot. I was given a straw and told to proceed when I was ready. This was probably the scariest part because it does feel a little weird willingly putting something into your body which has to be transported in a lead container. But then I thought of the alternative permanent treatment, which would involve having my neck cut open, and I gulped the liquid down. It tasted like water, save for a slight metallic aftertaste. I was surprised at this, because when they told me it was flavourless, I didn't believe them.

What has this got to do with food? I hear you ask. Well, for the next three weeks my body will still be emitting beta particles, although this will lessen as time goes on. This is affecting almost every aspect of my life at the moment. I have to avoid close contact with people as much as possible, particularly pregnant women and children for the next 3 weeks; I'm currently sleeping on the sofa so as not to expose my partner to radiation for 8 hours a night; I have to wear gloves while handling food (that's been interesting so far...); and while I am allowed outside, I can't go anywhere crowded, like, you know, shops and stuff. So, I am trying online grocery shopping for the first time. I am going to be working from home for a few weeks, as I can't go to the office, which means that while I'm being restricted in lots of areas, it gives me more flexibility over my cooking schedule.