It's been a while since I've posted - apologies if you've missed me at all. It's been a combination of having a lot going on and having lost my blogging-fu. Anyway, I'm determined to get back on the wagon, as it were.

Last week it was my fiancé's 30th birthday. I made him a couple of special birthday dinners to celebrate this event (I also made him a birthday banana bread, which was a disaster!), the first of which was toad in the hole, the second was another attempt at meatloaf.

I decided to use a different recipe this time, which is from Nigella Lawson's Kitchen: Recipes from the Heart of the Home. I thought this would be an extra-special treat for my fiancé because it has boiled egg in the middle and is covered in bacon! I used oak-smoked streaky bacon and it really helped to keep the meatloaf moist and gave it a lovely smokey flavour. 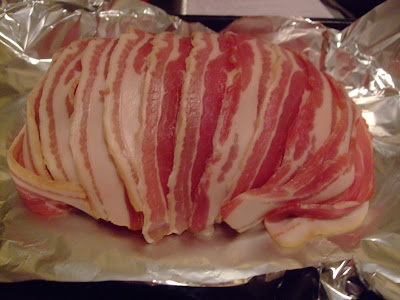 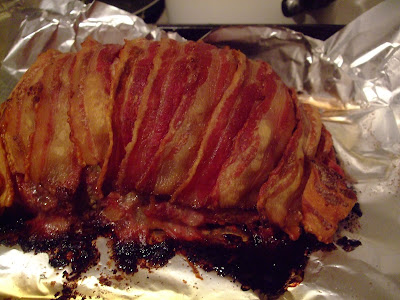 Sadly, I neglected to get a picture of it sliced, showing the egg in the middle. It reminded me of when we used to have slices of pork pie with egg in the middle as kids.
Posted by Charlene at 09:22