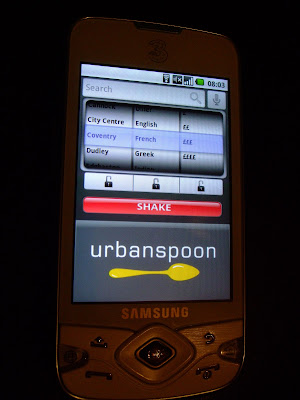 I have an android phone, so have decided to review some of the many food-related apps that are available. I will only be reviewing free apps, because I am too much of a tight-wad to pay for any.

The Urban Spoon app is based on the website of the same name. It uses Google Maps and GPS satellites to pinpoint your location so it can tell you the yummiest places to eat in your vicinity - could be very handy when travelling; except, my phone takes so long to get a satellite signal that I usually give up and opt to 'choose city' manually instead.

This app has the little novelty feature of using a slot machine-type interface which allows you to lock certain wheels and then you either click 'shake' or actually shake your phone and it comes up with a random restaurant fitting those particular options along with user reviews. This is good if you're not sure where you want to eat and want some suggestions. You can also look at a list of all the restaurants in a particular city and search for restaurants by city, but what you can't do is search for a particular restaurant name. You could argue that that's not what this app is for, but it would be handy if you wanted to look at reviews of a particular restaurant.

Of course, any app like this is only as good as its user generated content. From what I understand, users have to add restaurants before they appear on the app (at least there are relatively few restaurants actually on there for Coventry - but not that surprising considering it's a fairly small city), which means there could be some great restaurants that you are missing out on because they are simply not featured on the app. (I could, of course, fix this myself by personally adding all my favourite restaurants along with reviews, but so far I haven't had the time nor the inclination.) The reviews themselves are generally helpful. There is also the option to click 'like' or 'don't like' for each restaurant, the app then giving a percentage of how many people like the restaurant. I found it a bit frustrating that there isn't an 'it's ok' button.

I was going to write here how this application is generally reliable and doesn't crash very often, except when I've used it this morning to write this review, it's crashed twice on me and I've had to force it to close. Oh dear.

This is probably one of the better free restaurant finding apps on the market, however, and it can be fun for finding restaurants you never knew existed near you. It is also available for iPhone, apparently.
Posted by Charlene at 08:29