Chicken and Mushroom (not) Pie

I think it was random Googling that took me to the Morrison's website at the weekend – it had never occurred to me to look there before: I don't shop there and I didn't really associate it with yummy recipes (before now). But then I discovered their 'Great taste less waste' promotion and found this great recipe for chicken and mushroom pie using leftover roast chicken (or chicken and mushroom not pie, as I called it - I didn't want to get my fiancé's hopes up that it might be a pastry-based pie!). 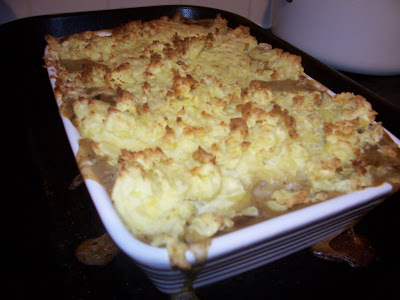 It's a fairly simple recipe and really, really tasty! I didn't have any dried tarragon, so used dried thyme instead, and I adjusted the quantities to how much chicken I had left over.
This stretched a 1.3kg free-range chicken which serves 2-3 people into two whole dinners for two. Economical, I think you'll agree!
Posted by Charlene at 18:42