Recently a friend gave me a voucher code for www.graze.com which got me my first box free and my second half-price. I'd heard about these boxes before but been a bit sceptical as I got the impression for some reason that it was just all nuts and seeds and it didn't really appeal. Once I actually had a proper look at the website though, and received my first box in the post, I was pleasantly surprised.

There is quite a range of foods included, including focaccia breads, olives and many weird and wonderful combinations of dried fruits. Also, they have a system when you can tick what you like and what you don't like, so you can choose not to be sent the stuff that doesn't appeal or you can try it and if you don't like it ask not to be sent it again.

The idea behind the box is to provide healthy snacks to nibble on throughout the day, keeping your blood sugar balanced and as the tagline says "eat more health food (fewer biscuits)".

As with my fruit and veg box, one of the things I like about it is the surprise of finding out what you have got this week. Here was my first Graze box: 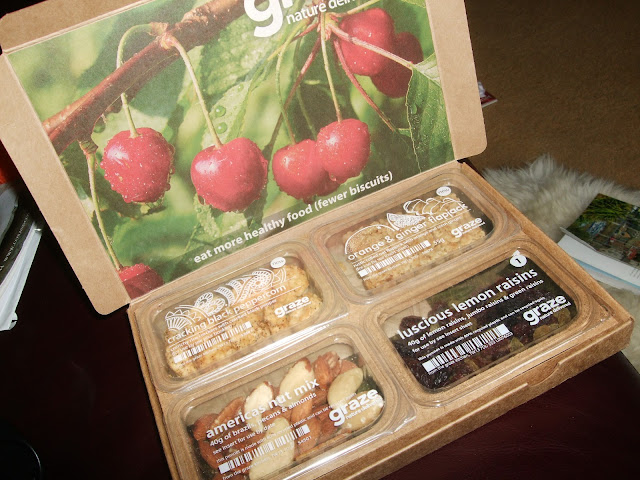 I like nuts and I like dried fruit, so I ate the nut mix (mmm, pecan nuts!) and lemon raisins first. Raisins were very lemony and very tasty, but I found alternating a few with the nuts best to cut through the sharpness of the lemon a bit! Still, they kept me going through a day of work and I would have got through the day without any other snacks were it not for the homemade apple cake a colleague had brought in that day - it would have been rude not to have a piece, really.

I was expecting not to like the cracking black peppercorn rice-crackers in the top left, because in my experience rice-crackers are bland and comparable to swallowing a load of air. These were small and concentrated rice-crackers, though, with a really good crunch and bags of flavour! I needed a glass of water after such pepperyness, but I'd definitely eat them again - they're very low in calories as well!

The orange and ginger flapjack was nice and much less sweet than I was expecting, which is probably a good thing for blood sugar levels and whatnot.

This box was free and I wasn't sure whether £3.49 was a lot for four punnets of nuts and fruit etc., but then when I happened to be in Marks and Spencer one day last week, I spied a small bag of raisins which cost £1.60. So I've reasoned that as the price of the box also includes delivery, and the snacks it includes are really, really yummy, it is utterly worth it. I am completely sold! Here's a peek at this week's box, which I haven't eaten any of yet: 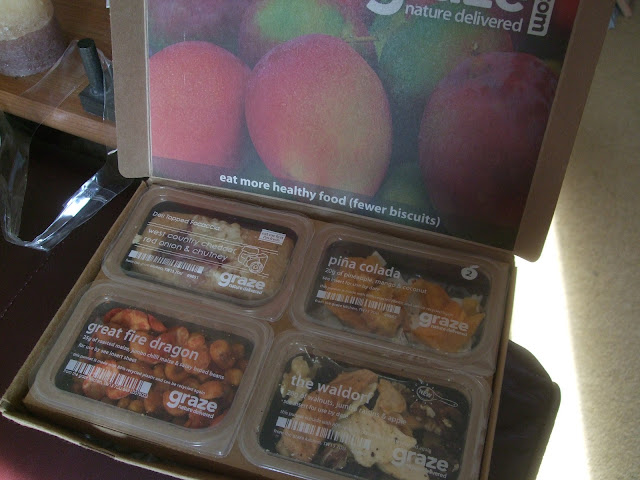 I can't wait to get stuck into this weeks tasty treats - I will do my best to save them for work, though. I have opted to get one box a week delivered to my home on a Saturday, so I have all my snacks ready for the week ahead at work: I can't guarantee how much of the week they will last me though...

If any of you would like to receive a free graze box, go to www.graze.com and use the voucher code: NTBYZLQ. I believe the offer is only available for a limited time. You have to sign up to receive the box, but if you decide you don't want it anymore, you can cancel at any time. I hope you enjoy it as much as I did, though!
Posted by Charlene at 15:43 2 comments

Thanks to Jam and Cream PR, this week I received my first ever foodie product to review courtesy of Hotel Chocolat.

The product I was sent was the Happy Egg and Tiddly Pot from their fabulous-looking range of Easter eggs. This particularly Easter egg is supposedly aimed at children, although it does acknowledge on the packaging that it is also for those of us adults who are still children at heart.

I suppose it is a good size for a child - it was a lot smaller than I was expecting when I received it! Here is a picture of it next to a wine glass for scale: 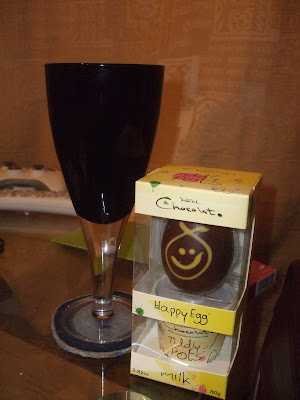 And here it is in my hand. 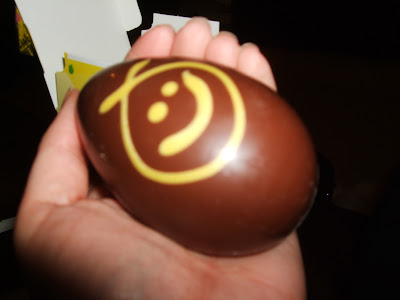 I ate the entire Easter egg in about 5 minutes while my fiancé was out the room so I didn't have to share any. When my fiancé returned, he said, "You appear to have inhaled the egg." It was good, though. I really like Hotel Chocolat's 40% milk chocolate - it is pretty chocolatey, but still pretty milky - a nice smooth balance!

My favourite part of this Easter egg, though, was the tiddly pot: 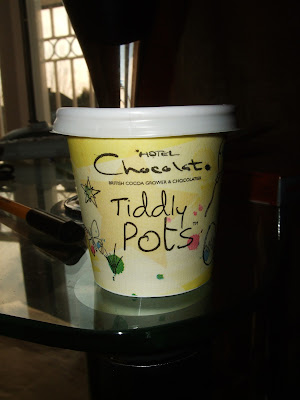 This was filled with solid milk chocolate chicks and bunnies. Now, these I did share with my fiancé who really liked them too and was impressed that they weren't hollow. And that's what made them preferable to me than the egg, because they were good solid chunks of chocolate to get your teeth into. Also, nibbling on one or two at a time was enough and I was able to enjoy these over a few days. I did feel I needed to give them a thorough testing before writing this review, though. 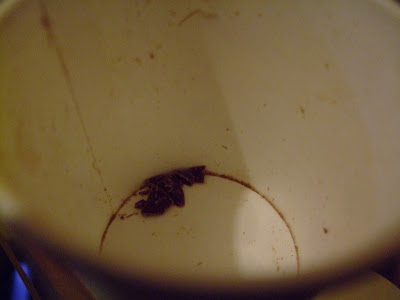 This Easter egg perhaps seems a bit pricey at £7 a pop compared to most Easter eggs, but it really is good quality chocolate and I'd rather have a smaller egg like this that tastes much better than one of the more widely-sold larger and cheaper ones.

Now, I'll just sit and hope someone buys me this for Easter...

Disclaimer: I was sent this product for free for review purposes. I was not required to write a positive review, and all views are of course my own.
Posted by Charlene at 22:02 2 comments

Convenience foods: the argument for

Since starting this blog, I've become rather taken, some might say rather sanctimonious about, cooking from scratch. Normally, when I have been in full health, I have cooked a meal from scratch 4-5 evenings a week (with the odd takeaway, meal out, meal at someone else's house thrown in in-between). I work full-time too - 37 hours a week. (My fiancé generally works longer hours than I do and has a much longer commute and does not enjoy cooking, therefore I have happily taken on the role in lieu of other responsibilities (e.g. washing up)). I have generally eschewed all things convenience food from microwaveable dinners to sauces that come in jars to ready-made pizzas.

I'm all for slow food. Totally. It tastes better, I get more enjoyment from eating it, and plenty of satisfaction from preparing it. It's food how food is meant to be.

But the key phrase above was "in full health". Recently things have been a bit more tough. I really don't like to complain too much because my illness is not that serious and is treatable (and I am in the process of being treated), but the fact is that as a result of the radioiodine therapy my thyroid now cannot produce enough thyroxine to keep my body functioning properly and I am in early stages of treatment, which may involve some tweaking of medication before balance is fully restored. Anyone familiar with the spoon theory will know what it can be like to have a chronic illness. I'm not going to expand too much on what it's like to live with thyroid disease, because that's getting off the point a little.

The point is, I've come to learn that convenience foods have a place in life. In particular, they have had a place in my life recently.

At first I felt guilty. I felt like I'd failed in my mission to provide myself and my partner with nutritious whole foods, as is my general aim when it comes to food. But what choice did I have but to load the freezer with things I could stick in the oven? (I could get my fiancé to cook, but some nights recently he hasn't been home until 9pm, by which point I would be crawling up the walls...) Not all of these things have been convenience foods as such: things like sausage and mash have been do-able some of the time. But I still felt crappy about it - of course I did. It's natural to feel crappy about not being able to do everything you normally can do.

Eventually you begin to accept it, though - that this is the way things are at the moment and you have to make do as best you can. And, actually, stocking the freezer with things that are easy for me to cook has proved to be a smart piece of forward planning - during previous periods of illness, I have been less prepared and this has led to more disappointment, more guilt and more takeaways.

Quite often, I'll have two options for dinner on the go - for example, I may have some braising steak in the fridge to make a stew should I feel up to it, but at the moment, I usually have a back-up plan too, either in the fridge or freezer.

The convenience foods may not taste as good, may be less nutritious, less good for the environment and hardly using local or seasonal ingredients, but when my choice is between going hungry because I physically do not have the energy to stand up in the kitchen for long enough to create a meal and eating something ready-prepared in a plastic packet, I'll take the food where I can get it. And I'm not going to feel bad or guilty anymore, because I'm doing the best I can.

I still check the ingredients labels on everything though before I buy and I still can't face eating battery-farmed chicken. Most places seem to do ranges of ready-meals, soups etc. which have pretty (if not, wholly) natural ingredients too. I like Covent Garden soups and I recently tried a dish from Marks and Spencer's Gastropub range which was both tasty and filling (shock, horror!).

The good news is that I'm gradually starting to cook more as I'm starting to feel better. I still don't feel I'm functioning at 100%, but I did cook from scratch three nights in a row recently. That was huge for me. It felt good. It tasted good too.
Posted by Charlene at 22:03 11 comments