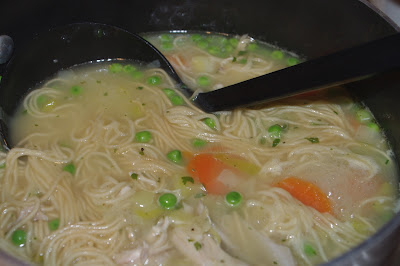 I really didn't feel like cooking tonight but I had some leftover roast chicken from Sunday, including the carcass and really didn't want it to go to waste (and I will have less time for cooking the rest of the week). Once I started cooking though, I was glad I did, because my adaptation of this Chicken, Sweetcorn and Noodle Soup recipe from BBC Good Food went down a storm!

The stock in this recipe is made from raw chicken, including the meat, but I thought it could probably work with a cooked chicken carcass. I had already separated the left over meat from the carcass, so I just used the carcass in the stock and then added the meat when it came to making the soup. I left out the celery because I didn't have any, but I think the flavour of the stock was still pretty good. It was probably a subtler flavour being a cooked chicken, but it worked pretty well with this recipe.

As you can see from my photo, I also did not use sweetcorn (I didn't have any), so I used frozen petit pois instead; and I used fine egg noodles rather than vermicelli. I halved the recipe, which was enough for 2 with a bit left over.

We also add a little soy sauce to each of our bowls after serving, which worked really well and gave it a subtle oriental kick.

Sometimes leftovers are better than the original dinner.
Posted by Charlene at 21:38