Broad beans are possibly my favourite vegetable. My mum would often add them raw to a salad (and still does) and it was usually my job to pod them. I liked this job because it meant I got to eat some.

Upon googling things to do with broad beans, I came across this recipe for Risoni with baby peas (and broad beans) by Hugh Fearnley-Whittingstall. 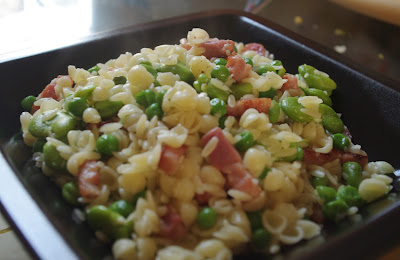 Hugh would probably balk at the fact that I used broad beans from the supermarket and frozen peas, but, hey ho, sometimes you've got to work with what you've got. Sadly, I realised too late that I didn't have any garlic left, so had to leave that out. And for the bacon, I used smoked bacon lardons. I cooked them well until they were nicely caramelised and they gave the dish a great smoky flavour. I left out the oil, because the bacon had enough fat to fry themselves in. I used half broad beans and half peas, and I didn't have quite enough orzo pasta, so added some small shell pasta as well. Plenty of pepper definitely goes a long way to boosting the flavours in this dish.

Ridiculously simple and quick to make - the very definition of fast food! Even after a long and tiring day spent in a office that may as well have been situated in the centre of the sun, I was still up for cooking this.

Next time, some garlic would definitely add to the flavours, and I feel that some shaved parmesan wouldn't go amiss either.
Posted by Charlene at 19:54