I've recently started to make a concerted effort to eat more healthily, and cut down on the amount of fat and calories in both mine and my husband's diet. While a bit of weight loss would be a welcome side-effect, this is not necessarily my chief aim. I've been quite inspired by watching The Hairy Dieters, and realised that by making a few changes, I could make our diet a lot healthier.

I've been trying various recipes over the last few weeks, mostly from the BBC Good Food Website, and thought I'd share what has worked well so far. 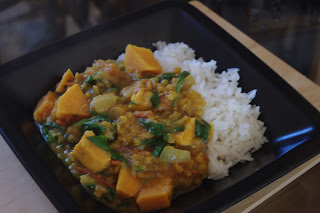 This was delicious! Really good flavours. As you can see from the picture, I served mine with rice, and doing so meant there was enough left over for lunch the next day. I will definitely be making this again. One portion on its own is only 350 calories, and I wasn't hungry later (this is always a good test of whether a dish works for me - if I'm going to end up eating more later, I might as well have something less healthy for dinner!). 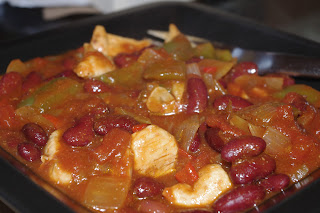 A perfectly nice dish. I used chicken breast instead of thigh fillets and red kidney beans instead of pinto beans, and left out the green beans because I didn't have any. I served it with a pitta bread each, which went very nicely with it. Nice and filling and only 435 calories - not bad. I might make it again if I happen to have the ingredients in.


3. Lemon & rosemary pork with chickpea salad
I'm kicking myself for not remembering to take a picture of this because it looked fabulous! The flavours were wonderful too - it's a really lovely marinade. Marinading is not something I do often, so it was nice to do something a bit different. I halved the recipe, except the ingredients for the marinade and that worked out fine for two people. Actually, we still had chickpeas leftover at the end. I offered my husband more chickpeas once he'd finished, but he said he was all chickpea-ed out. This was really delicious and I would definitely cook again, but I did end up eating some toast later in the evening. 396 calories per serving, apparently.

4. Three bean tomato and spinach stew
This was ok. I used a tin of mixed beans and I used runner beans. I served it with some rice. One portion is supposedly 153 calories, but I suspect we had more as I only got 3 servings out of it, but even so it is still low in calories. Might make this again if the mood takes me and I have the right ingredients in.

5. Winter vegetable pie
Although this is called Winter Vegetable Pie, I think you could have it all year round. Plus I substituted the cauliflower with broccoli, which I think is less wintery. I have nothing against cauliflower - in fact, I like it quite a lot - but my husband doesn't, so I had to use broccoli. I think it would have been nice with cauliflower though. This was quite tasty, and quite filling (although, again, we probably had slightly more than one portion each - to be fair, I did not have enough potato, so only used about 500g potatoes, so I think we had less potato but more veg each). I used vegetable stock instead of water, which I think probably helped the flavour a lot. 388 calories per portion. I would like to make this again, perhaps using some different veg to see how it works.

One of the advantages to my new healthy eating regime is that I am trying lots of new recipes and it's giving me lots of new and creative ideas for cooking dishes. I actually feel a lot more enthusiastic about cooking than I have done for a while and have been cooking a lot more recently.