Recently I found out via Twitter that there is a 1940s themed tearoom in Stratford upon Avon called the Fourteas. Being something of a history buff, I decided I had to visit.

There are some great little touches including period decor, serving staff wearing traditional 1940s clothes, menus made to look like ration books, and even bits of old newspaper hanging next to the actual toilet roll in the toilets! 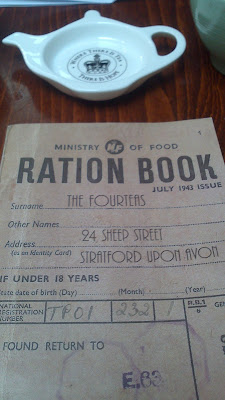 Fortunately, the products served are not all from the era of rationing, and much of the cuisine is modern in style, although there are nods to the war era with some of the food and drink (the Churchill Club Sandwich; Ovaltine!).


The Fourteas source their bread, fruit and veg, and meat from local suppliers in Stratford, and all cakes are baked on site. Check out their menu for more information. The loose leaf tea is also imported by a local supplier in Warwick, The Golden Monkey Tea Company. I was impressed by the range of teas on the menu and that there was even a good choice of caffeine-free fruit/herbal teas for hippy-dippy weirdos like me. I had the Bora Bora Fruit Tea when we visited, which was very good indeed.

I highly recommend the Fourteas if you fancy having breakfast or lunch in a slightly unusual setting, or if you just fancy a jolly good cup of tea and a piece of cake!
Posted by Charlene at 13:15