Playwrights is a restaurant that we have eaten lunch at many, many times - mostly because they do a good selection of chunky sandwiches, tasty salads, and jacket potatoes, as well as some larger meals such as fish and chips, chilli con carne, etc.

Despite being frequent lunch visitors, we had never eaten at Playwrights for dinner, so we decided to rectify this state of affairs a few weeks ago. We were a bit worried as we hadn't booked and it was a Saturday night, but we decided to turn up early and find another restaurant in the city centre if they couldn't seat us.

As it happens, we needn't have worried as the restaurant was empty when we arrived. This was worrying in itself at first, but it did start to fill up later on in the evening.

The service was really good from the start: relaxed but very friendly and helpful.

First of all we ordered some wine, which was Hidden Road Shiraz at £15.75 a bottle. 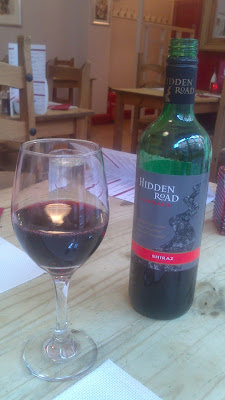 This was a very nice bottle for the price (well, as restaurant prices go...) and it complemented the spices in our food nicely.

For starter I had the Mozzarella, tomato & olive salad, finished with rocket & balsamic oil priced £4.25. Now, you can't go too wrong with a dish like this, and needless to say it was nice - it tasted of all the ingredients it was supposed to taste of. It perhaps could have done with a little more rocket to give it a bit more crunch, but otherwise, no complaints from me. 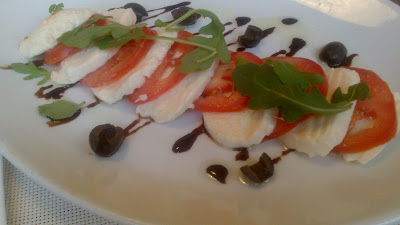 My husband had the Smooth Brussels pate, red onion jam, toast & mixed leaves for £4.75. Not a bad price at all for a very tasty starter.

Playwrights tend to do a fair bit of Mexican food, including Mexican nights on the last Saturday of each month. We weren't there for Mexican night, but we both chose something with a Mexican theme from their menu, as it had been a while since we'd had any decent Mexican food.

I chose the vegetable chilli burrito, white rice & salad (£8.95). I had never tried a burrito before, but it sounded like the sort of thing I'd like. There was a good variety of vegetables in the vegetable chilli, but perhaps could have done with a few more beans to add to the texture. It was fairly spicy (as you'd expect) and I had to ask for some sour cream to cool it off a bit - the waiter was very obliging. I thought there was probably a bit too much rice on the plate considering it was quite a large burrito, but having said all of that, it was on the whole a very tasty meal and I would quite happily order it again in future. 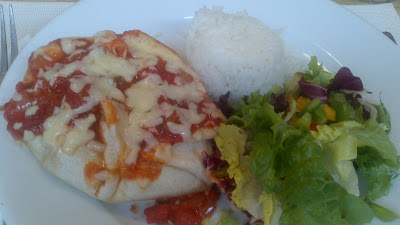 Regular readers of this blog will probably not be surprised to hear that my husband had the Tex-Mex grill – A half rack of pork ribs, chorizo sausage & Cajun chicken breast, served with hand made battered onion rings, home made coleslaw, hand cut chips & salad (£14.95). He very much enjoyed this Mexican twist on his favourite meal, although he found the chicken breast was a little too dry and he would have preferred chunks of chorizo sausage rather than wafer-thin slices. Still, pretty impressive, I think you'll agree. 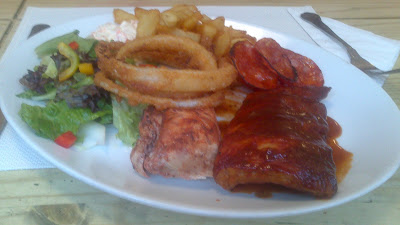 Desserts at Playwrights tend to be of the classic British variety. We were both pleased with our choices of Chocolate fudge cake served warm with vanilla pod ice cream (£4.50) and Treacle sponge pudding & custard (£4.50). 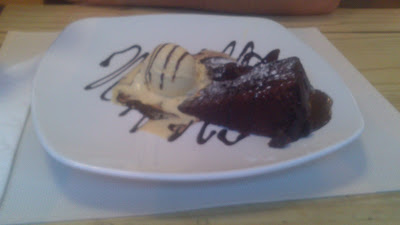 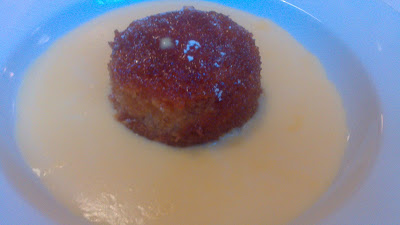 
Overall then, we had a lovely evening at Playwrights and would happily return for dinner again. The food is reasonably-priced and is tasty, home-cooked fare, the service was good, and it has a central location on historic Hay Lane. Perfect for an impromptu relaxed and cosy meal on a Saturday night.
Posted by Charlene at 13:15