Things have really slowed down with the garden now we are well into Autumn. I have also been very busy of late with other commitments, so have not had time to go and do any work in the garden for weeks. This was my first free weekend for a while, and I managed to get out in the garden for an hour after Christmas shopping this morning.

It has also massively slowed down on the food front. I had a small crop of potatoes from a growbag, but I made a mistake and dug them up too early really, so they were a bit on the small side. My butternut squash plant never did too well in the end, only producing one very small squash - the plant got very attacked by slugs which I think were brought out by the wet weather - I didn't have much problems with slugs before the damp early Autumn weather arrived. I also wondered whether it got a little too wet for the plant, given that we didn't have much let up from the rain for a good few weeks. I've still had some leeks growing up until today, but that's about it. Next year, I'll perhaps try to plan to have more winter vegetables growing, such as Kale and maybe some parsnips.

Lack of free time meant I hadn't yet got round to planting my pea and broad bean seeds until today. I had meant to do this in November, but I'm hoping that 1st December is not too late. I've covered them with fleece, just in case, and also to keep the cats and birds away! My green manure is still growing well, so it's nice to have things growing even if I can't eat anything at the moment! 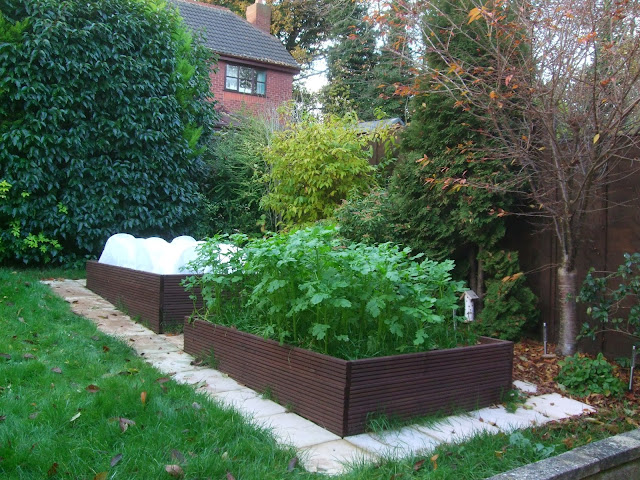