I have this really old Maltese cookbook that my mum gave to me called Cooking Maltese Cuisine (she in turn was given it by a relative). All the recipes are wonderfully vague and it shows its age when it gives a recipe for Turtle Pie  (the first ingredient is '1 kilo of fresh sea turtle'...). Don't worry, I'm not going to be making anything with sea turtle (interestingly one of my newer Maltese cookbooks lists a recipe for Turtle Pie, but when you turn to the page it's supposed to be on it says something like 'this recipe has been removed because sea turtles are now an endangered species'). But I have decided to try and make some more Maltese dishes in general. 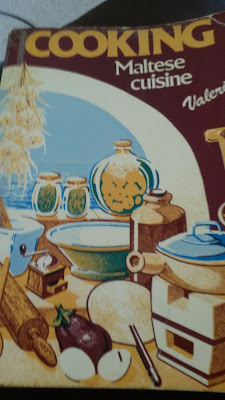 Given the vagueness of the instructions, and the fact that I like to give most recipes my own twist these days, I adapted a recipe from Cooking Maltese Cuisine for 'Spaghetti with aubergines' and made it my own. The original recipe basically involved making a tomato sauce from tomato puree and water, cooking the pork mince in it, and serving it with spaghetti and fried aubergine slices on top. To cut down on washing up I decided to cook my aubergines with the tomato sauce and pork. Et voilá. 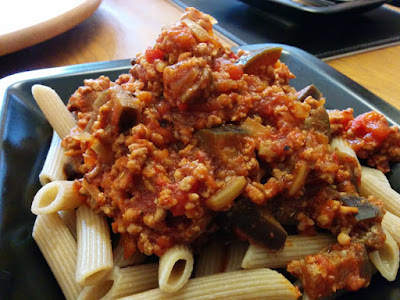 Method
1. Heat the olive oil over a medium heat. Add the onion and cook gently for 5 minutes until the onion is starting to soften.
2. Add the aubergine and garlic and cook until the aubergine is brown and starting to soften (5-10 minutes).
3. Stir in the dried mixed herbs and the pork mince. Turn the heat up a little and fry until the pork mince is cooked, stirring frequently.
4. Add the tomatoes and the tomato puree. Season with salt and pepper to taste. Bring the sauce briefly to the boil and then simmer gently for 20 minutes until the tomato sauce has thickened.

Serve with your choice of pasta.
Posted by Charlene at 15:01 0 comments