I have previously reviewed the Las Iguanas in Leamington Spa when it first opened - you can find my review here. We really enjoyed the food, so were looking forward to a similar experience in Coventry. So, I made my way into the city centre on a Friday night after work to see how things compared at the Coventry Las Iguanas.

When I arrived, the restaurant was buzzing, which was nice to see. I think people had clearly been taking advantage of the cocktails during 'Happy Hour' (12pm - 7pm), and who can blame them? There has definitely been a lack of places to drink cocktails after work in Coventry, so I am pleased that Las Iguanas has been able to fill that gap. I found the music a little too loud for my liking, however, and the layout of the restaurant is confusing at first. The bar is at the front and you have to go round the bar to find people to seat you. I also felt they had squeezed far too many tables in for the size of the place (a common problem in restaurants nowadays, it seems).

Service was friendly and the staff were doing their best to help, but seemed a bit rushed, presumably due to how busy the restaurant was. Given that I visited during their first week of opening as well, I can certainly forgive a few teething problems.

The absolute best part about our visit was the food and drink. To drink we chose the Carmenére Veramonte, a Chilean red. This hadn't been our first choice of wine because they had a couple that weren't available, but it all worked out ok in the end, because it was truly a great wine. A rich, full-bodied wine, which was delicious on its own, but also stood up to the spicy flavours of the food very well.

For a starter we shared some bread and olives (which is listed as a side on the menu). I really liked the olives, which were very fruity. The bread was ok, but I couldn't work out if it was supposed to be warm or not. 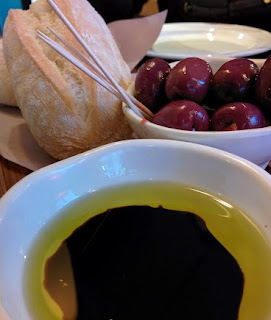 The main event was perhaps the best part though. I chose the Camarao La Criolla from the 'Brazil and Beyond' section of the menu. The dish is described on the menu as, "Plump prawns in a sauce of peppers, tomatoes, parsley, coriander, garlic, paprika, coconut milk, cumin & lime. With chilli & garlic buttered wheat & corn tortillas & piles of spring onion & garlic rice". It was spicy, creamy and delicious. The prawns were cooked nicely and the whole dish was just buzzing with flavour. It came served with a wedge of lemon, and I found squeezing a bit of lemon juice onto the dish really helped to bring out the subtleties of the flavour too. 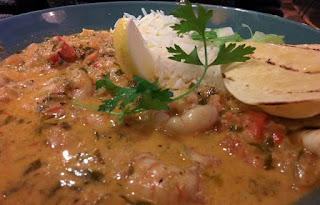 My husband had the steak, which he really enjoyed. It was cooked perfectly to his specification (medium rare). 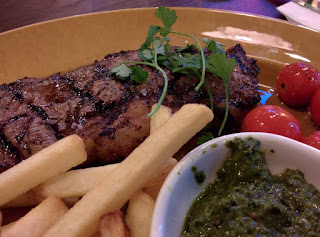 I couldn't really manage much in the way of dessert, but I fancied something cool and refreshing after the chilli heat of my main, so I opted for the mango sorbet, which was very tasty. My husband couldn't resist the lure of the churros and I nicked one of his too - they were amazing. Lovely and crisp on the outside, wonderfully soft inside and heavenly chocolate and dulce de leche sauces as dips. 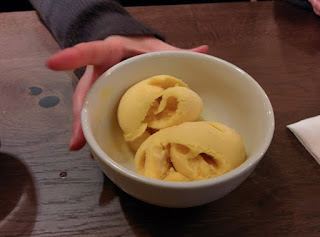 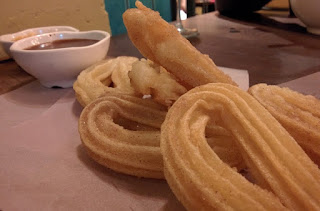 Overall then, this was a gorgeous meal and I definitely plan to return. Prices are a little on the expensive side compared to some other chain restaurants, but I think this reflects the quality of the food (which really is very good quality). I'm very happy that Las Iguanas has come to Coventry and I look forward to dining there again in the future!

Disclaimer: The meal was complimentary for review purposes. I was not required to write a positive review and all views are of course my own.
Posted by Charlene at 15:20 0 comments