My cold continued apace this week (it's starting to get better now, thankfully), which meant that some of my plans had to be, erm, revised. This was mainly because I didn't manage to get out of bed early enough to make sandwiches from the leftover chicken, so I ended up using it in a dinner instead.

I had bought some okra with the intention of making an entirely different dish than this. Okra is now perhaps one of my favourite vegetables after trying it in a lamb stew in a local Lebanese restaurant. I decided to make this Chicken gumbo, which I have made before using chicken breasts, but thought it could work well with the leftovers too.

I didn't have any green pepper or celery, but I sliced a couple of small carrots instead. I substituted the dried thyme and sage for dried mixed herbs. I also didn't bother with the flour, and just added the cooked chicken in along with okra towards the end. I served it with brown rice.

I found this very tasty - perhaps not an authentic gumbo as some have pointed out in the comments on the website, but it still makes a good meal. The chicken was very flavourful and I love the combination of spices in this dish. It was a very warm, comforting bowl of chicken and vegetables, suitable for the cold weather and indeed someone suffering with a cold. 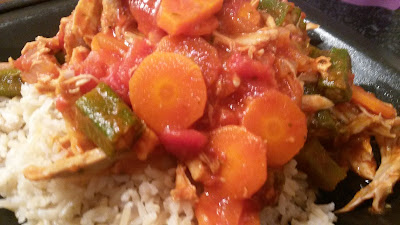