We don't 'do' Valentine's day. But we do tend to celebrate our 'House-iversary' on 14th February. It was the day we moved into our home 3 years ago.

It seems fitting that much of the day was spent clearing this corner of the garden. One of our shrubs keeled over recently and it needed clearing, and we also did a good amount of chopping back of other trees and shrubs in that corner, and have at last created some space. It was hard work, but I was pleased with a job well done.


After the tiring garden work, I didn't much fancy spending ages in the kitchen. And as we had missed pancake day earlier in the week, I went for a pancake themed dinner for our House-iversary. For our main meal we had duck and pancakes courtesy of Gressingham. It's a very neat and tasty kit. I just added some cucumber and spring onions, and we had ourselves a scrumptious meal. 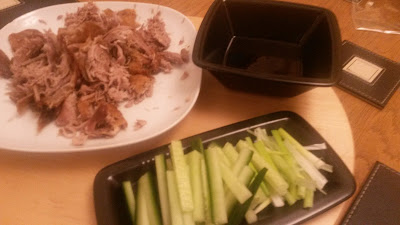 Then for pudding I made pancakes and we had them with lemon and sugar and Haagen Dazs ice cream. I was fortunate enough to be given some Haagen Dazs vouchers for review purposes, specifically to review their Strawberry Cheesecake ice cream. Now, I have to admit Strawberry Cheesecake flavour wouldn't normally be my go-to ice cream. Because everyone knows that chocolate is the best ice cream flavour. But this was pretty good - I liked the crunchy biscuit pieces in the ice cream and the strawberry sauce. And it went pretty well with the pancakes. It's still not my favourite Haagen Dazs flavour (that would of course be Belgian Chocolate), but it was good to try a different flavour for once.

I also feel I ought to mention my pancake recipe, even though recipe seems like a bit of an exaggeration. A chef friend of mine once told me how to make batter and I've followed this method ever since. First of all, you don't measure anything. For the pancakes I used two eggs, beaten with a whisk. I added the flour gradually, mixing with the whisk, until the texture was meringue-like (i.e. enough to form peaks). I then added milk and whisk that in until it was about the consistency of double cream. Works for pancakes, toad in the hole and Yorkshire puddings.
Posted by Charlene at 07:32