I'm a bit disappointed with how little I've cooked over the last week (I don't really count stir fry kits or ready made veggie burgers as proper cooking - certainly nothing to blog about, anyway), but I guess that's just how some weeks go. It was a tiring one.

I was determined to do at least some proper cooking at the weekend to make up for it. And I finally managed to use up that pork fillet that's been sitting in the freezer for ages. Let's be honest, a pork fillet isn't as exciting as a lovely bit of pork belly, but it's healthier, blah, blah, blah. I tried my best to jazz it up a bit.

I based it on this recipe from BBC Good Food, but I went more with a mustard-y theme, rather than a herb-y theme. I mixed 1 tbsp wholegrain mustard with a few squeezes of lemon juice, and coated the pork fillet in that rather than the herb mixture. I used carrots, parsnips and a large potato as the accompanying veg (sadly, I didn't have any apples - an apple would have been very nice with this). I also added a splash (about 100ml) of wine when I added the chicken stock. 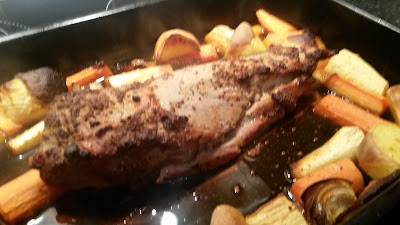 Actually, it was pretty good. Definitely one of the tastiest bits of pork fillet I've ever cooked. I'll definitely be cooking it again. The sliced pork made a lovely sandwich the next day too.
Posted by Charlene at 22:19