To celebrate our 2-year anniversary of togetherness, my fiancé and I have spent the weekend in Stratford-upon-Avon discovering the culinary delights it has to offer.

I had booked a table at Malbec Petit Bistro for Saturday evening, after doing a google search for award-winning restaurants in the local area. Malbec has won Michelin's Bib Gourmand, an award recognising good food at good value. More on this restaurant later, though.

We arrived in Stratford sometime after 11am, and once we'd checked into our hotel, we wandered around the town a bit before I decided it was time for lunch and we started looking at some menus from the wide variety of eating establishments in the town. I didn't want anything that was going to be too large a meal because of the booking we had in the evening, but equally I wanted more than just a sandwich. I was rather taken by the frontage of the Garrick Inn, not to mention its rich history (the plague arrived in Stratford here!) and tasty looking menu which included 'light bites' as well as main meals. And they were advertising mulled wine outside. How could I resist?

The Garrick Inn was cosy and warm and the staff were polite and friendly. I chose the Winter Ploughman's Platter from the 'light bites' menu, because it looked interesting. It came with squash soup (very tasty), chunks of bread, a pickled onion, salad and I chose to have Tickler Mature Cheddar Cheese, Pork, Apricot and Cider Terrine and Apple and Date Chutney. All very delicious, especially the chutney which was reminiscent of mincemeat. I don't know about 'light bite' though - it was quite large and I couldn't quite manage all of it, but I'm not complaining because it kept me going for the rest of the day! 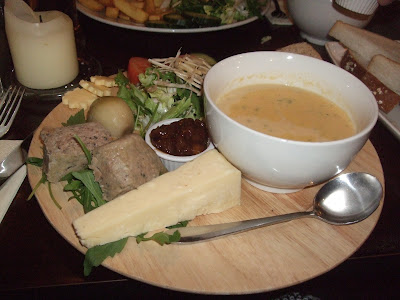 My fiancé had the burger. Altogether we paid £20 for our lunch and that included alcoholic drinks, so prices are definitely reasonable. You can view the main menu here.
We were pretty tired by the evening, as we'd had a full day of walking round in the cold, so I was glad I'd booked the table for 7pm. Malbec Petit Bistro opens for evening business at 7pm and we were the first customers to arrive. The restaurant is quite small and intimate and I liked the warm decor and the relaxing music that was playing. Unfortunately, as the evening went on it was impossible to hear the music and it became a little too intimate for my liking - for while it is a lovely restaurant, it is small and it was very busy and the tables were very close together: I did feel a little like I was dining with the people to my left and right, which felt a bit of a shame seeing as we were celebrating our anniversary.
But, no matter, onto the food! The menu isn't huge, yet there's a good range of meals on there - I was tempted by lots of different things, including the mushroom starter and the Warwickshire lamb main. Many of the items were (fairly) local and seasonal, which was pleasing. In the end, I plumped for smoked eel as my starter, as I had never tried eel before and I was curious. 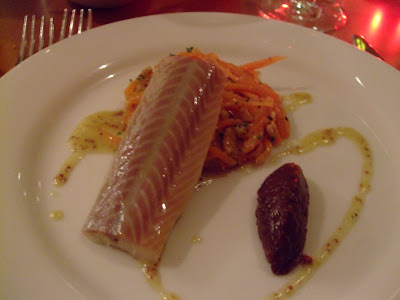 It was very good. It tasted a little like kippers and a little like smoked salmon. It seemed thicker than other kinds of fish, but was more fishy than I was expecting somehow. The carrot and walnut salad that accompanied it was also very good: I'm not a huge fan of nuts in salads, but this went some way to converting me. It was the dressing that really brought it all together.
For my main I stuck with the fish theme and had the lemon sole, which was very tasty indeed. I was intrigued by the white asparagus it was served with - I found it rather bland and tasteless unlike green asparagus, which was a shame. A fab idea to serve it with tagliatelli though - it went very well with the fish. (And, yes, I did nibble a bit before I remembered to take a photo!) 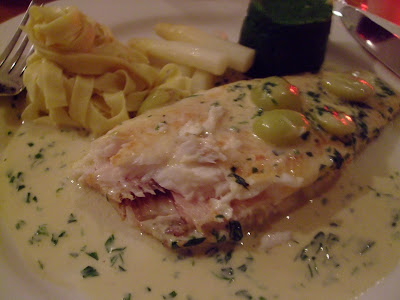 I was quite full after all of this, but decided I had to have a look at the dessert menu. I decided to share a dark chocolate marquise with banana ice-cream and toffee sauce with my fiancé. 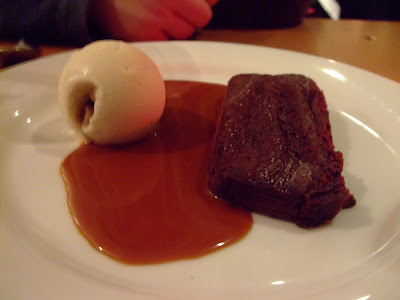 The pudding really was stunning. The chocolate was so rich, the ice-cream so flavourful and the toffee sauce smooth and sweet - a perfect pudding! In fact, my fiancé and I both agreed that the starters and pudding outshone our main meals (my fiancé had a mushroom thing for starters and the venison pie for his main); not that the mains weren't lovely too.
I felt that the 'good value' part of the Bib Gourmand award very much depends on your personal circumstances and background. Yes, in a sense, we got very good food at a not unreasonable price considering the quality of food and ingredients; but at the same time for us this was about our limit in terms of prices we can justify spending in a restaurant (have a look at the sample menu on the website for ideas of prices - we had an apperitif, three courses and a fairly expensive bottle of wine, but for discretionary reasons I don't want to reveal just how much we paid on this occasion!).
Also, while it was wonderful and a delicious meal and I'm glad we had that experience, we were filled with expectations for this restaurant as its reputation preceded it. And it definitely met those expectations, but in a strange way this meant it lacked a certain sense of surprise and delight at how good the food and service was; whereas the food and service we received at the Garrick Inn, where we just stopped because we happened to be passing and knew very little about, was a complete joy because we had no preconceptions going in. I'm sure there's a lesson to be learnt here somewhere!
So, we'll definitely be returning to the Garrick Inn, we may return to Malbec if we're feeling flush, but we definitely won't be returning to the White Swan Hotel where we stayed the night. A general lack of good service, cleanliness and quiet made for a not particularly nice stay. I was not impressed with their breakfast either!
Posted by Charlene at 16:39