I have mentioned on this blog before that I am half Maltese and I love eating and cooking Maltese food. I can cook a few things my mum has shown me and a few things from a book we got when we holidayed in Malta, but really I think my repertoire when it comes to Maltese cooking is quite limited. That is why I was delighted to discover Did You Put Garlic?, a blog predominately about Maltese food.

There's some great recipes on there and the first one I decided to try was Kusksu or Maltese Spring Soup. Now, I did have a slight problem in that I couldn't find any dried kusksu or Israeli cous cous or even orzo pasta in Sainsbury's, and I didn't have time to go to Holland & Barratt, where Mer of Did You Put Garlic? says she gets hers from; so, I ended up using small pasta shells, which is the kind of thing my mum always puts in her Maltese soups. Here is the result: 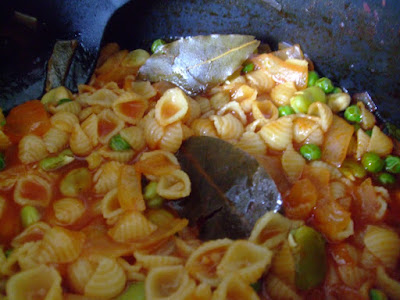 Yeah, I may have gone a little overboard on the pasta. And I added fresh peas to mine, because I love fresh peas! It took me around half an hour to shell all the broad beans and peas though! This was a very tasty soup and I will definitely be making it again, perhaps with the right ingredients and I might try a poached egg in it next time.

Incidentally, I had never had this soup before I made it the other week. My mum never cooked it and I found out why when I spoke to her about it: when I told her what it was, she said, "Urgh, my mum used to make that. I hated it!" But then she also said she used to hate Maltese meat stew, but when I cooked it for her she thought it was delicious!
Posted by Charlene at 11:43 6 comments

Apple sauce & the secret of crackling

The last couple of weeks I've been practising creating lovely, lovely crackling on different cuts of pork; last week was roast pork belly with coriander and fennel seasoning from my River Cottage Everyday cookbook and this week I had a go at a pork leg joint. Both times I've succeeded in getting nigh-on perfect crackling, and I've got to agree with Nigel Slater, that there's really nothing to it. He says:


There is no great secret, despite what silly people may tell you. Simply get the butcher to score the skin, then rub a little oil and seasoning in it before you put it in the oven. Roast at a high temperature for a while, then turn the heat down a little. No secret.*

And if I can get good crackling in my pokey little oven, then anyone can. Unfortunately, both pork dinners were devoured before I remembered to take a photo, so you'll just have to take my word for it.

I did, however, get a photo of the apple sauce I made to go with the pork today: 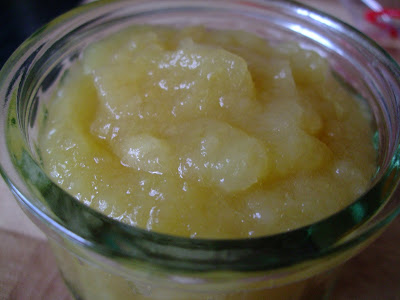 You know, just looking at that photo is making me want to go into the fridge and get the leftover apple sauce out and eat it with my fingers...

But, anyway, the recipe is another one from River Cottage Everyday and it is very simple - I used 2kg Bramley apples (cored, peeled and sliced) and 4tbsp caster sugar (the sugar is dependent on how sweet you want it) and simmered it gently in a large saucepan until it looked pretty much as it does above. My fiancé says he would have liked it a bit sweeter, but that was just right for me, as I like to still get some of the tartness from the apples coming through.

I think next time I will make less because I have quite a lot left in the fridge, although the book says it keeps for about two weeks. (It can also be used as an apple compote - so I think I'll be having some mixed with some natural yoghurt over the next couple of weeks. Yummy.)

And while it is a simple recipe, it took a long time to peel, core and slice all those apples. I chose to listen to Aerosmith while I did this - you may have a different rock band you like to listen to while slicing apples, but I recommend something with a good beat.


*Real Cooking by Nigel Slater
Posted by Charlene at 21:38 5 comments

Keema with (or without) peas

First of all, let me say, this is not the most photogenic dish. I mean, look at it: 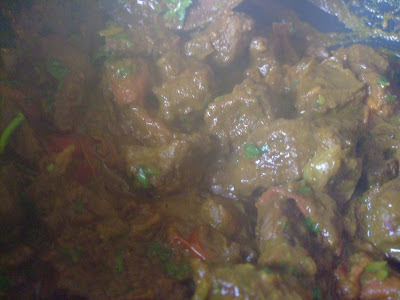 Well, I suppose it's not that bad... It doesn't look too much like dogfood, does it?

I can assure you that it smells and tastes great. The recipe is adapted from this BBC Good Food recipe, which I followed pretty much exactly last week. I found using minced lamb made the dish quite greasy, so I decided to use some chopped up lamb leg steaks this week for a chunkier texture. I also used three, rather than two, chopped fresh tomatoes this week to make it a bit more tomatoey and a bit more saucy (oo-er). And I didn't have any peas in this week. But it still worked well without, although I could have done with adding a little more yoghurt (I was adapting it for 2 people), as I managed to make it almost hotter than the sun in terms of spice. It was edible though, which was good (unlike the time my fiancé decided to make red thai curry and put an ENTIRE JAR of red thai curry paste in...).

I served it with Dina Khobez Wholemeal Flatbreads (because I was too lazy to make my own), which were a great find in the supermarket on the way home from work this evening! It goes well with rice too.
Posted by Charlene at 21:30 3 comments

Please go to Jo's Kitchen to see a guest post I did on there this week - it's a yummy recipe for Mediterranean vegetables, garlic chicken and cous cous!
Posted by Charlene at 14:30 4 comments