After I'd badgered Jen of In the Kitchen etc. for her recipe for meatloaf, I kind of had to go ahead and make it. I normally avoid any recipe which uses cup measures because it is just weird and wrong, but I sucked it up and dusted off my cup measures for this one. You can find Jen's recipe which I followed here. 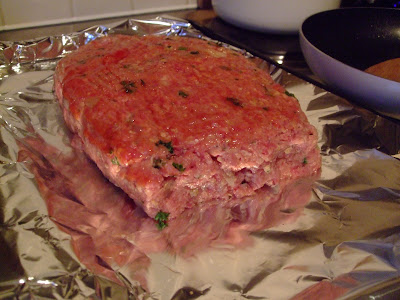 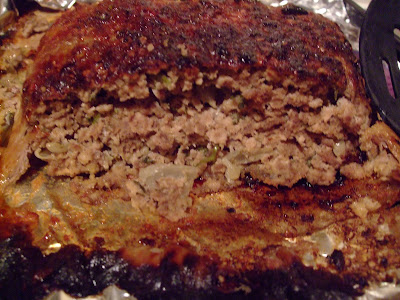 My fiancé enjoyed this dish very much and is already nagging me to make it again. He likes it because it is essentially a giant burger. I have to admit I wasn't such a massive fan, which is neither the recipe nor Jen's fault, but probably me doing it wrong. For a start I used 50% pork and 50% beef, because I happened to have that, so I don't know if that affected the flavour. I was probably also a little haphazard with my measurements, and I found the meatloaf itself a little dry and a little bland, and the glaze was far too sweet for me. I blame the Americans and their incomprehensible measuring system.

Having said that, I enjoyed making this. And there is plenty left over which I plan to serve in baps for lunch. And my fiancé is happy. :)
Posted by Charlene at 08:29