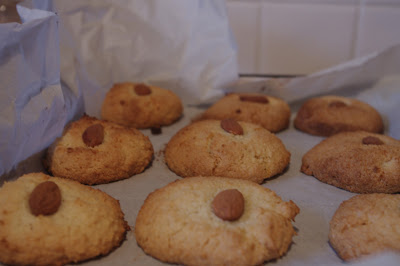 I recently discovered ilovefood.com.mt, which is a great resource for Maltese recipes and also sells Maltese foodstuffs in the online shop (very tempting, but the shipping costs to the UK are horrendous!).

I decided it was time to do a bit of baking and I fancied trying something Maltese, as I've never made any Maltese sweets before. I opted for Biskuttini tal-Lewz or Almond Biscuits. I have also heard these referred to as Almond Macaroons and they are quite Macaroon-like - being crunchy on the outside and soft in the middle.

I have never made anything like this before so wasn't sure if they were cooked properly inside, but I was assured by relatives with more baking experience than me that they were fine.

Reactions to these biscuits were mixed: basically people who love the flavour of almond loved them and people who were not so keen on almonds found them too almond-y. I read somewhere that they go nice with a coffee and if I were a coffee-drinker, I can totally see that. The aroma as they were cooking was amazing.

I made a couple of mistakes - I think they should be a fair bit smaller than the giant biscuits I made. And I would have loved to have made them with rice paper on the bottom, but after making a special trip out to Sainsbury's only to be told that, after a long time searching, "I thought we did it, but we don't do it anymore," I thought I would just bake them without. A shame, because I still have a childish love of rice paper (it's paper that you can eat!).

I did find an alternative recipe here, which I might try next time because unlike the recipe I made it includes vanilla essence and lemon juice, which may take the edge of the almondiness (I am just making up words now).
Posted by Charlene at 19:43