The thing about grocery shopping online is that sometimes you don't know how much you're going to get of something. For example, in my last shop I ordered 1 broccoli, and the broccoli that arrived was almost as big as my head.

Normally, I just boil broccoli, but I needed to use the whole thing in one evening (just using half the florets inevitably ends up in the rest of it going off before I get a chance to use it), and didn't fancy a whole tonne of boiled broccoli.

I decided to give roasting a go. Upon googling 'roast broccoli', this is the first recipe I came to. 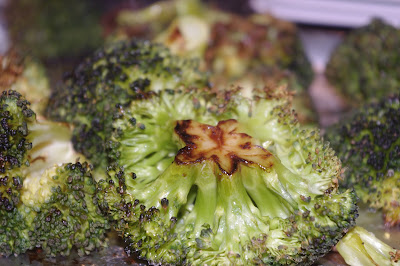 It was very tasy. I left out the cheese at the end (and the pine nuts and basil), but it was still good. I don't agree it was as good as a steak, as the blog I got the recipe from suggests - the two things cannot be compared. But the lemon, garlic and olive oil really made this extra special.

I served it as a side dish with a couple of sausages and some potato wedges. It made a very filling meal. I am happy.
Posted by Charlene at 20:24 2 comments

Allotment update - "Weeds are flowers too, once you get to know them."

Not an awful lot to report on the allotment. We have mostly been weeding and adding compost to the soil. These are jobs that would normally be done over Winter, but as we only got our allotment at the end of January, we're just having to do what we can. I am hoping to have a couple of beds ready for planting by April time.

The third bed is absolutely chock full of weeds, which have sprung up even more thanks to the milder weather recently. My fiancé is all in favour of using a chemical weed killer on them; I am not. We dug a small patch of them up this weekend and it took FOREVER. We are planning to grow fruit trees in this bed at some point, possibly not until next year.

I kind of felt bad about pulling up the weeds, because they had started to flower and the bees are absolutely loving them. Which makes me wonder about leaving at least some of them in that bed for a while. We would need to manage it to make sure it doesn't get out of control, but it seems silly to me to get rid of something which attracts pollinating insects and didn't cost me anything. Some of them may also be beneficial to the soil, like clover, but I am rubbish at plant idenitification, so who knows. I don't want to incur the wrath of the allotment association, but as the quote from A. A. Milne says in the blog title, weeds are flowers too! Does anyone else have any thoughts on this? Also, what is your favourite method of getting rid of weeds?


While we steadily continue to battle getting the outside ready, I thought I may as well start off some of the inside plants in my propagators. 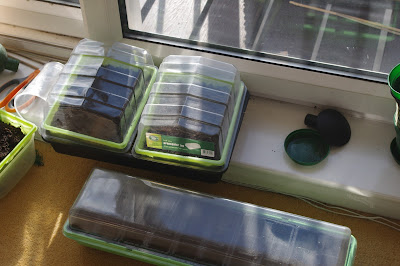 So far I have sown tomatoes, mint, red basil, marigolds and broad beans (about 2 months too late for the broad beans, but I'm hoping that by starting them off indoors, they will be ready to be planted out at about the right time!). Hmm, I think I'm going to need some more propagators...
Posted by Charlene at 16:33 2 comments

This month's theme for the River Cottage Rocks challenge is Sunday Lunch, hosted by Jo of Jo's Kitchen. Not sure I quite managed to enjoy a leisurely Sunday pottering about in the kitchen, as Jo suggests in the challenge; I've recently joined a gym and spent the afternoon there, but nevertheless I dragged my aching limbs into the kitchen and cooked this delicious pork belly this evening. 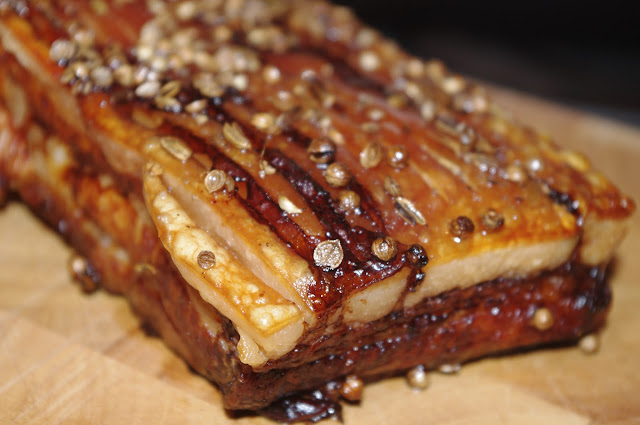 The recipe is from River Cottage Everyday (p. 244), but I also found a very similar recipe on the Waitrose website. I did not use thick end of pork belly, just a regular piece of pork belly, so reduced the cooking time accordingly. I served the pork with roasted carrots and fennel and some roast potatoes. I was hoping to make some apple sauce (recipe from the same book) to accompany it, but I didn't have the time or energy in the end. I wrote about the apple sauce recipe here.

Still, it was delicious, as ever. Pork belly is one of my favourite cuts of meat. And the fennel and coriander gives the crackling an interesting edge.
Posted by Charlene at 20:41 4 comments