Fiesta del Asado claims to be Birmingham's first Argentine Asado restaurant. Having never tried Argentine food before, my husband and I jumped at the chance to dine there as the guests of one of the managers. 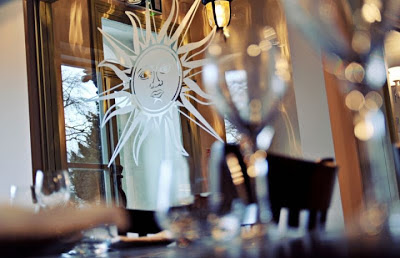 Fiesta del Asado is located on the Hagley Road in Edgbaston, so a little bit of a trek if you're travelling from Coventry as we were - we opted to get a taxi from Birmingham New Street station, but according to Google Maps, the restaurant is about a 20-minute walk from Five Ways station.

First impressions were that the restaurant was very stylish and modern, yet a bit rustic looking. It had a nice atmosphere, although we found the restaurant a bit noisy, but this was probably because we ended up being seated next to some rather loud people; and we didn't mind so much once the wine and food was served, as we were focussing more on that! 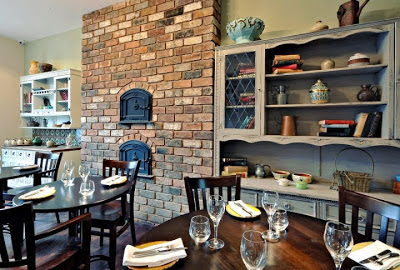 Service was good - very attentive, but as I mentioned, we were dining as guests of one of the managers. However, we did notice that others also seemed to be receiving similarly good service.

For starters I ordered Aceitunas marinadas - marinated gordal olives stuffed with guindilla. These were HOT, but I like them. They made an exciting and fiery start to the meal! My husband had Morcilla Curada - traditionally-smoked black sausage flavoured with paprika & sweet caramelised onion. He enjoyed this very much because it was a bit like a slightly spicy black pudding. We were also served some bread and what looked like an olive tapenade, which was delicious.

For our mains, both my husband and I ordered steaks: I had the 8oz rump and my husband had the 11oz fillet on the bone. My steak was really tender and juicy and I really liked the spices it was seasoned with - they added lots of flavour without being overpowering. Both steaks came with salad served on the side, and we also ordered a couple of extra sides: fries with parsley and garlic, and a selection of vegetables tossed in lemon and butter. The chips were really good: nice and crispy on the outside and soft and fluffy in the middle, and the vegetables were also really well-cooked and well-seasoned.

For dessert, I ordered the Churros con chocolate caliente (traditional churros with spiced hot chocolate), as the waiter had recommended them, and my husband ordered the chocolate fondant. The waiter returned with my husband's dessert but not mine, explaining that the chef had suggested we get into the Argentine spirit and share both desserts, so they'd bring us the next one when we finished the first! This was fine with us... The fondant was very good - it came served with dulce de leche ice cream and walnut brittle, which provided wonderful textures as well as flavour. The churros were very good too, and they were something I'd never had before. I really enjoyed the spiced chocolate dipping sauce that accompanied them, as did my husband, who said it took all his effort not to drink the rest of the chocolate after we'd finished the churros!

Prices are reasonable considering the high quality of the food, and we'd be happy to return again as paying customers, although maybe we will wait until the weather is a little bit warmer, so we can walk from Five Ways!

Disclaimer: This meal was complimentary for review purposes. I was not required to write a positive review, and all views are of course my own.
Posted by Charlene at 18:12 0 comments