So, this didn't quite work. I tried to throw something together using a load of stuff in the fridge which needed using up, and I didn't plan it properly beforehand and I shouldn't have added white wine - it made the whole dish far too sweet (not quite sure what I was thinking). I won't post an actual recipe given that it wasn't that good, but roughly it was diced chicken breast, fresh tomatoes, chicken stock, white wine and a variety of different veg. I then served it with a celeriac mash (which was actually quite nice). I took a photo, but don't try this at home folks.

It was edible to be fair, but I wouldn't cook it again without making some fundamental changes! 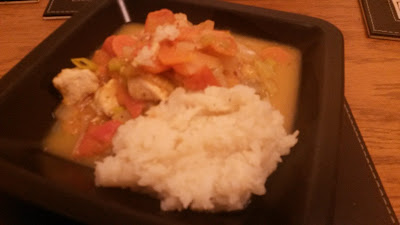